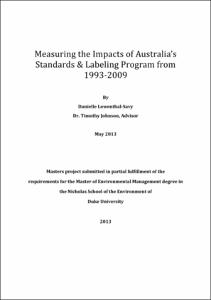 View / Download
1.1 Mb
Date
Author
Lowenthal-Savy, Danielle
Advisor
Johnson, Timothy
Repository Usage Stats
516
views
614
downloads
Abstract
As a part of larger efforts to address climate change and curb greenhouse gas emissions, Australia first put categorical energy efficiency labels on residential appliances in the mid-1980s. The first Minimum Energy Performance Standards (MEPS) for refrigerators were later implemented in 1999 and updated in 2005 to align with U.S. levels in 2001, considered to be the world’s strictest domestic appliance standards at the time. Considered together, these actions set Australia apart as having one of the most aggressive appliance efficiency programs in the world. For these reasons, Australia is a potentially fruitful case study for understanding the dynamics of energy efficiency standards and labeling program impacts on appliance markets. Fortunately, in the Australian case, market data allows for empirical determination of these questions. This paper analyzes Australian refrigerator efficiency data covering the years 1993-2009. Sales data was obtained from GfK Group and includes data in each year for each product class and each efficiency rating category. Statistical regression analysis is used to model market introduction and adoption of high-efficiency refrigerators according to the logistic adoption model formalism, and parameterizes the way in which the Australian program accelerated the adoption of high-efficiency products and phased out others. The results indicate that the introduction of MEPS accelerated the penetration of high-efficiency appliances onto the market. The MEPS revision in 2005, in which Australia adopted the 2001 U.S. refrigerator standards, ultimately allowed high-efficiency appliances to penetrate the market, but its announcement several years prior and its implementation initially resulted in stagnating adoption rates that remained flat. Through this analysis, this paper not only presents a detailed, robust, and quantitative picture of the impacts of energy efficiency standards and labeling in the Australian case, but also demonstrates a methodology for the evaluation of program impacts that could form the basis of an evaluation framework for similar programs in other countries.
Type
Master's project
Department
Nicholas School of the Environment and Earth Sciences
Subject
Australia, energy efficiency, refrigerators, domestic appliances
Permalink
https://hdl.handle.net/10161/6857
Citation
Lowenthal-Savy, Danielle (2013). Measuring the Impacts of Australia’s Standards & Labeling Program from 1993-2009. Master's project, Duke University. Retrieved from https://hdl.handle.net/10161/6857.
Collections
More Info
Show full item record