Self-Regulation before and after a Developmental Transition: a Study of Adaptive Goal Change in Retirement 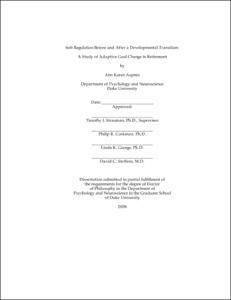 Retirement is the quintessential transition from mid-life to late-life for many working Americans. However, questions about the positive and negative effects of retirement have sparked widely divergent empirical findings. Developmental theories of self-regulation may add to the understanding of the subtle differences and transitions within retirement. Retirement may be viewed as a transition in resources (e.g., psychological, social, and financial), so that individual mental health outcomes are linked to how well these resources are reallocated. According to goal disengagement perspectives, failure either in disengagement from past goals or reengagement in new goals can lead to decreased well-being and increased depression. Further, as individuals enter late-life, their focus may turn away from growth and achievement and more toward preventing losses and maintaining current resources. In the present study, it was hypothesized that when pre-retirement individuals were compared against early and late post-retirement individuals, engagement in developmentally relevant goals (e.g., self, family, and leisure) in retirees would be associated with better mental health outcomes while retirees who reported continued engagement in less developmentally accessible goals (i.e., occupational and financial) would report worse outcomes.

A total of 100 study participants (aged 50 to 84) were interviewed about their current goals and completed self-report measures of depression, well-being, social support, physical health, and regulatory focus. Interview data were coded for goal content as well as for regulatory focus. Findings did not support the hypotheses, as there were no significant differences among the 47 pre-retirement, 29 early post-retirement, and 24 late post-retirement participants in their goal content or regulatory focus. Goal content also was not associated differentially with depression or well-being among the three groups. However, the interview data did provide valuable information about the heterogeneous and fluid nature of retirement. Retirement, rather than a clear loss in certain resources (i.e., financial and occupational) and a clear gain in others (i.e., time and personal freedom), seemed to be a renegotiation of those resources. Furthermore, even pre-retirement participants named retirement goals, suggesting that, if a goal transition did occur, it may have been a more conscious, gradual process.