Conservation or Culture? An Analysis of Shark Finning in the United States 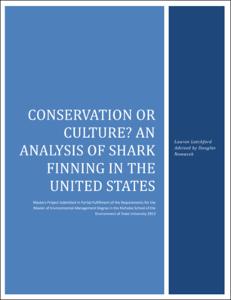 View / Download
1.3 Mb
Date
Author
Latchford, Lauren
Advisor
Nowacek, Doug
Repository Usage Stats
2,512
views
49,236
downloads
Abstract
Each year, more than 73 million sharks are killed for their fins. In response to declining populations, the United States, has passed federal regulations to ban the finning of sharks within the U.S. Exclusive Economic Zone. Many states have taken the ban further to restrict the, sale, trade, possession and distribution of fins. While many legislators, politicians and conservationists believe these bans will protect shark species, others believe that it discriminates against the ancient traditions of serving shark fin soup. This project analyzes shark fin soup consumption and its significance in Chinese culture. It then examines the status of shark populations, shark fin as an economic driver and current international management to explain the importance of shark conservation. As the U.S. is the eighth largest shark finning country in the world, federal and state regulations on shark finning is reviewed to provide a legal basis for the practice in question. Opinions of U.S. citizens on shark finning and cultural traditions are shared as this is the foundation for why this project was chosen. An ethnographic pilot survey disseminated to Chinese, Hong Kongese and Taiwanese Americans in San Francisco, CA, New York, NY and Washington, D.C. offers evidence towards understanding the importance of shark fin in the modern day cultural practices. Survey results found that many respondents hold similar opinions about decreasing shark fin soup consumption. Out of the 77 surveys, 39% of respondents have significantly decreased their consumption. The highest response for the reduction in consumption was for environmental reasons. Additionally, many respondents believe that serving shark fin soup is not as important to them as it is for their family. These results and their comments indicate that this tradition may be diminishing. Opinions from survey material, publications, and personal communication are correlated with peer reviewed science in order to provide policy recommendations. Suggestions for the most appropriate policy alternatives are offered with the desire to come to a nexus of feasible regulation, effective management and cultural acceptance.
Type
Master's project
Department
Nicholas School of the Environment and Earth Sciences
Subject
shark finning, shark fin soup, shark management
Permalink
https://hdl.handle.net/10161/6890
Citation
Latchford, Lauren (2013). Conservation or Culture? An Analysis of Shark Finning in the United States. Master's project, Duke University. Retrieved from https://hdl.handle.net/10161/6890.
Collections
More Info
Show full item record