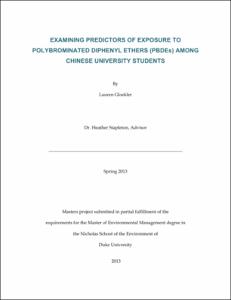 View / Download
506.1 Kb
Date
Author
Gloekler, Lauren
Advisor
Stapleton, Heather M.
Repository Usage Stats
287
views
301
downloads
Abstract
Polybrominated diphenyl ethers (PBDEs) are flame-retardant compounds common in furniture, textiles, plastics, and electronic items. Throughout the use and disposal of products, PBDEs may enter the indoor or outdoor environment. Many studies have shown that PBDEs cause adverse human health effects, including but not limited to disruptions in thyroid and estrogen hormones, changes in fertility, and developmental effects. In order to decrease human exposure to PBDEs, it is important to understand the fate and behavior of these compounds in the environment. Globally, usage patterns differ between geographical regions. Although fate and distribution of PBDEs has been well studied in the U.S. and Europe, much less is known about exposure in Asia, specifically for China. The purpose of this study was to document the levels of major commercial PBDE mixtures, and common replacement compounds (Firemaster 550), in handwipes taken from a small population of Chinese students as an estimate of exposure potential. Additionally, PBDE levels were compared to differences in behavioral and lifestyle variables to see if any were significant predictors of exposure. It was hypothesized that time spent indoors, number of electronic items, hand washing frequency, and cleaning behaviors would influence the PBDE levels found on the hands. In each handwipe sample, at least one of the PBDE congeners or alternative compounds were detected, suggesting that the Chinese population is being exposed to these compounds. Several behavioral and product variables were significantly correlated to exposure levels and others were suggestive of a relationship. For PentaBDE, floor cleaning method was a significant predictor of exposure (p=0.02). For DecaBDE, floor cleaning method and number of computers in the room were significant predictors (p=0.02, p=0.05). Other variables showed large differences in the mean flame retardant levels between groups, such as time spent indoors, transportation behavior, and time spent watching TV, but were not statistically significant. Due to the small sample size and non-normal distribution of PBDE levels in the study population, it is recommended that these variables be examined again with a larger sample size. To date, this is the first study to measure levels of PBDEs and alternative compounds in handwipes from a population in China.
Type
Master's project
Department
Nicholas School of the Environment and Earth Sciences
Permalink
https://hdl.handle.net/10161/6978
Citation
Gloekler, Lauren (2013). Examining Predictors of Exposure to Polybrominated Diphenyl Ethers (Pbdes) Among Chinese University Students. Master's project, Duke University. Retrieved from https://hdl.handle.net/10161/6978.
Collections
More Info
Show full item record