Is the Blind Side Tackle Worth It?: An Analysis of the Salary Allocation of the NFL Offensive Line 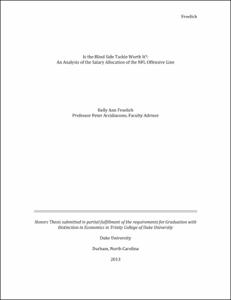 Files
thesis
340.2 Kb
data_4_11.dta
6.4 Mb
Date
Author
Froelich, Kelly
Repository Usage Stats
545
views
532
downloads
Abstract
The importance of the left tackle position in comparison to the other offensive line positions in the National Football League (NFL) has been widely debated amongst sports commentators, as the left tackle is traditionally the second highest paid player on a football team behind the quarterback; yet, this debate lacks empirical findings. This paper aims to quantify the impact of the individual offensive linemen on the chance of winning a game on a game-by-game basis and then compare the impact of the left tackle to the other offensive line positions. Using a conditional logistic regression and the marginal effects from that regression, the results do not dispute the NFL's current trend in spending more on the left tackle in comparison to the other offensive line positions. The results show that optimal spending for the left tackle could extend to 15.976 percent of the salary cap. Thus, the possibility remains that the optimal spending for the left tackle can range up to fifteen percent of the salary cap, seven percentage points above the next highest optimal offensive lineman spending.
Type
Honors thesis
Department
Economics
Subject
NFL
Salary Allocation
Offensive Line
Left Tackle
Football
Permalink
https://hdl.handle.net/10161/7024
Citation
Froelich, Kelly (2013). Is the Blind Side Tackle Worth It?: An Analysis of the Salary Allocation of the NFL Offensive Line. Honors thesis, Duke University. Retrieved from https://hdl.handle.net/10161/7024.
Collections
More Info
Show full item record