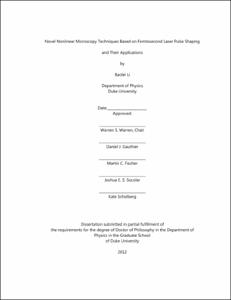 Nonlinear optical microscopy serves as a great tool for biomedical imaging due to its high resolution, deep penetration, inherent three dimensional optical sectioning capabilities and superior performance in scattering media. Conventional nonlinear optical microscopy techniques, e.g. two photon fluorescence and second harmonic generation, are based on detecting a small light signal emitted at a new wavelength that is well separated from the excitation light. However, there are also many other nonlinear processes, such as two-photon absorption and self-phase modulation, that do not generate light at new wavelengths and that have not been extensively explored for imaging. This dissertation extends the accessible mechanisms for contrast to the later nonlinear optical processes by combining femtosecond laser pulse shaping and homodyne detection. We developed a rapid pulse shaper with a relatively simple and compact instrument design that modifies the spectrum of individual laser pulses from an 80 MHz mode-locked laser. The pulse shaper enables simultaneous two-photon absorption and self-phase modulation imaging of various nanoparticles in-vitro with high sensitivity. We also applied this imaging technique to study the nonlinear optical response in graphene. Because our technology detects the nonlinear signature encoded within the laser pulse itself, we achieve intrinsic contrast of biological and non-biological samples in highly scattering media. These capabilities have significant implications in biomedical imaging and nanophotonics.