The Night Watchman: Hans Speier and the Making of the American National Security State 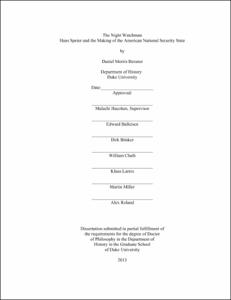 What accounts for the rise of defense intellectuals in the early Cold War? Why did these academics reject university life to accept positions in the foreign policy establishment? Why were so many of German origin? "The Night Watchman" answers these questions through a contextual biography of the German exile Hans Speier, a foreign policy expert who in the 1940s and 1950s consulted for the State Department and executive branch, and helped found the RAND Corporation, Stanford University's Center for Advanced Study in the Behavioral Sciences, and the program in international communication at MIT's Center for International Studies. In the late 1920s and early 1930s, witnessing ordinary Germans vote enthusiastically for Adolf Hitler engendered a skepticism of democracy in Speier and a cohort of social democratic intellectuals. Once Hitler assumed power in 1933, Speier and his colleagues were forced to flee Central Europe for the United States. In America, a number of these left wing exiles banded together with U.S. progressives to argue that if democracy was to survive as a viable political form in a world beset with "totalitarian" threats, intellectual experts, not ordinary people, must become the shapers of foreign policy. Only intellectuals, Speier and others argued, could ensure that the United States committed its vast resources to the defeat of totalitarianism.

World War II provided Speier and his academic cohort with the opportunity to transform their ideas into reality. Called upon by government officials who required the services of intellectuals familiar with the German language and culture, hundreds of social scientists joined the Office of War Information, Office of Strategic Services, and other new organizations of the wartime government. After the war, this first generation of defense intellectuals, uninterested in returning to the relative tranquility of academia, allied with government and military officials to create a network of state and corporate institutions that reproduced the wartime experience on a permanent basis. Speier himself became chief of RAND's Social Science Division and a consultant responsible for advising the Ford Foundation on where to direct its resources. In the latter capacity, he counseled the foundation to fund institutions that provided a home to intellectuals concerned with refining the methods of social science to improve policy-relevant knowledge.

Speier's interwar experiences with Nazism and postwar understanding of Joseph Stalin's actions in Eastern Europe and West Berlin led him to conclude that all totalitarian societies, be they fascist or communist, were run by elites who did not wish to reach détente with the United States. For this reason, Speier declared, U.S. decision-makers should treat all Soviet diplomatic overtures as feints designed to trick the western alliance into weakening its international standing. He further argued that because totalitarian states were autocracies in which the public had no say in foreign affairs, the United States should not use propaganda to win ordinary people living in the Soviet Union to its side, but should instead employ methods of psychological warfare to disrupt the personal and professional networks of Soviet elites. Speier's position at RAND and his relationship with the State Department provided him with opportunities to disseminate his opinions throughout the foreign policy establishment. By virtue of his central location in this institutional matrix, Speier influenced a number of key U.S. foreign policies, including the inflexible negotiating position adopted by U.S. delegates at the Korean War armistice talks; the tactics of U.S. psychological warfare directed against East Germany and the Soviet Union; and President Dwight D. Eisenhower's "Open Skies" proposal at the 1955 Geneva Summit.

By the 1960s, Speier had helped institutionalize both a system in which intellectuals had direct access to foreign policymakers and a policy culture that privileged expertise. His trajectory demonstrates that the Cold War national security state, broadly defined to include governmental, nongovernmental, and university-associated research centers, was not solely a proximate reaction to the perceived Soviet threat, as historians have argued, but was also the realization of a decades-old, expert-centered political vision formed in response to the collapse of the Weimar Republic.