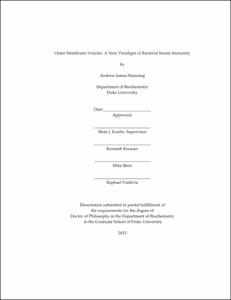 Outer membrane vesicles are an important constitutive product of all Gram-negative bacteria. Bacteria have evolved many responses to alleviate all different types of stress. The primary objective of this dissertation is to investigate the role of outer membrane vesicles (OMVs) as a method by which Gram-negative bacteria can quickly act to protect themselves against particular threats. Generally, we find that stressors whose primary effect is on the outer membrane can be protected against by OMVs. Throughout this study, a variety of different microbiological and biochemical methods are used to answer key questions in the innate ability of OMVs to protect against particular antimicrobials. Using Escherichia coli as well as Pseudomonas aeruginosa as model organisms we tested the ability of purified vesicles from each species to protect themselves and other hosts. Using bacteriophage T4, we investigated the ability of OMVs purified from E. coli to adsorb phage as well as how this interaction affected the efficiency of infection. We found that OMVs are protective against antimicrobial peptides, as well as bacteriophage. In the course of understanding this protection we also observed and characterized the cross species effects of both OMV protection as well as phage infection. Where typically a phage infects a specific species, we found that T4 associated OMVs treating a non-native host P. aeruginosa resulted in the production of a novel prophage. Upon further examination, we determined that this induction was occurring via a novel pathway that we attempted to further characterize by performing a genetic screen to identify genes important to this induction. The work within this dissertation fully supports the hypothesis of a regulated response to outer membrane acting stimuli, resulting in the induction of vesiculation and the adsorption of stressor in the extra-cellular milieu. This model of protection agrees with the idea of a bacterial innate defense system, which acts in the short term before the adaptive response can fully occur, resulting in a bridge between the untreated to the treated and resistant culture.