Destructivity: A Political Economy of Military Effectiveness in Conventional Combat 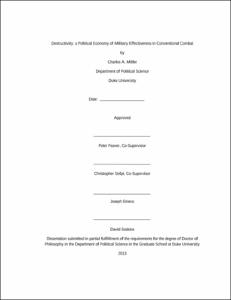 Neither technological nor numerical superiority accounts for the outcome of most battles. Instead, some intangible factor has historically mattered more. The political science literature has termed this factor `military effectiveness', yet using this phrase to refer solely to efficiency in one of the many tasks militaries are asked to perform can be dangerous. Armies which are good at conventional combat may be less effective at internal security, for instance. I therefore propose a new term `destructivity' to refer exclusively to military effectiveness in high intensity, conventional warfare.

Previous literature has suggested a number of factors which may account for variation between states in their levels of destructivity. Wealth, human capital, regime type, ethnic heterogeneity, culture and the external pressures of the international system have all been suggested by past scholars. Quantitative literature has uncovered many broad level correlations which could map onto numerous plausible causal mechanisms, while the qualitative literature has pointed to numerous theories which have remained untested outside the small number of cases which motivated them.

My dissertation puts forward a unified theory of destructivity based on the recognition that armies are not unitary actors but must be understood in light of the motivations and interactions of the individual officers and men which comprise them. Borrowing a concept from organizational economics, I suggest that an Army is a large scale `rank order tournament' in which individuals enter in the hope of advancement through mastering military skills and performing well in battle. The broader the funnel of entry into these tournaments, the stiffer is competition for advancement and hence the higher the Army's level of skill. It follows from this that whatever restricts entry into the tournament - low literacy, politically motivated restrictions from coup vulnerable leaders and poor prospects for post service employment - reduces destructivity.

Motivating troops to fight is a complex undertaking. The broader goals of the war by themselves are insufficient as any given soldier's marginal contribution to the outcome of the war is minute. Regrettable though it is to concede, harsh negative punishments such as the death penalty can be effective in deterring the most obvious and observable forms of military shirking. In situations where soldiers' actions are hard to observe, however, negative sanctions are less effective. Here, the concept of peer monitoring, taken from microfinance, is more important - soldiers are deterred from shirking by the prospect of censure from other members of their small groups.

I first test my theory on a dataset of battles taken from Biddle and Long, Pilster and Boehmelt and Clodfelter. I then proceed to use four case studies to illustrate my causal mechanisms. Using original archival material and interviews with retired Iraqi military personnel, I show how both low literacy and coup proofing undermined Iraq's destructivity relative to the United States. I then examine the British and German cases to answer the question - what happens when two states of equal literacy, with no history of coups, fight one another? I suggest that market structure, by affecting the relative opportunities for military recruits inside and outside the service, is the key factor in providing a marginal advantage to one side relative to the other.