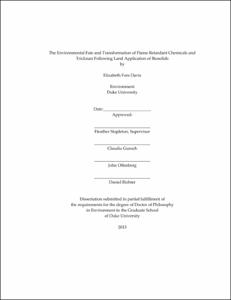 Over half of the biosolids produced in wastewater treatment facilities in the United States are land-applied as a nutrient-rich soil amendment. However, these biosolids are not regulated for chemicals of emerging concern that are often present at high concentrations in biosolids. The overall goal of this dissertation is to evaluate the specific chemical fates of these compounds in biosolid-amended soil, including their persistence, degradation pathways, and phytoaccumulation potential.

As a first step toward this goal, the fate of select brominated flame retardants (BFRs) when exposed to sunlight was examined to evaluate their photodegradation pathways and to identify degradation products that may be used as markers of environmental degradation in future studies. In Chapter 2, the photodegradation of three polybrominated diphenyl ether (PBDE) congeners (i.e., the nonabrominated congeners BDE 206, 207, and 208) was examined individually in three different solvents exposed to natural sunlight. Rapid degradation of nonaBDEs was observed coincident with formation of octa- and heptabrominated PBDEs. The photodegradation pathways of each nonaBDE congener were consistent among the different solvent matrices tested; however, mass balances were found to vary with solvent type. The octabrominated congener, BDE 202, and the ratio of BDE 197 to BDE 201, were identified as degradation products that can serve as environmental markers of debromination. Additional photodegradation studies were conducted with two new BFRs used in replacements for pentaBDE mixtures: 2-ethylhexyltetrabromobenzoate (TBB) and di(2-ethylhexyl)-tetrabromophthalate (TBPH). Both TBB and TBPH underwent photolysis more slowly than nonaBDEs and primarily formed debrominated products. This study is the first to report on the photodegradation of TBB and TBPH via debromination reactions and suggests that these replacement flame retardants may be more photolytically persistent than higher brominated PBDE congeners.

Chemical analysis of biosolids collected from wastewater treatment plants (WWTPs) can help determine whether these flame retardants are migrating from the indoor environment to the outdoor environment, where little is known about their ultimate fate and effects. In Chapter 3, concentrations of a suite of flame retardants and the antimicrobial compound triclosan were measured in opportunistic samples of municipal biosolids and the domestic sludge Standard Reference Material (SRM) 2781. Grab samples of biosolids were collected from two WWTPs in North Carolina and two in California. Biosolids samples were also obtained during three subsequent collection events at one of the North Carolina WWTPs to evaluate fluctuations in contaminant levels within a given facility over a period of three years. The biosolids and SRM 2781 were analyzed for PBDEs, a suite of alternate brominated and chlorinated flame retardants, and triclosan. PBDEs were detected in every sample analyzed, and &#931;PBDE concentrations ranged from 1750 to 6358 ng/g dry weight (dw). Additionally, the PBDE replacement chemicals TBB and TBPH were detected at concentrations ranging from 120 to 3749 ng/g dw and from 206 to 1631 ng/g dw, respectively. Triclosan concentrations ranged from 490 to 13,866 ng/g dw. The detection of these contaminants of emerging concern in biosolids suggests that these chemicals have the potential to migrate out of consumer products and enter the outdoor environment. Furthermore, land application of these contaminated biosolids may result in soil contamination and enhance the bioaccumulation and long-range transport potential of these compounds.

In order to fully evaluate the benefits and impacts of biosolids land application, a comprehensive view of the behaviors of chemicals of emerging concern in biosolids is needed. In Chapter 4, the fates of a suite of flame retardants and triclosan in soil were evaluated in a greenhouse experiment utilizing three biosolid amendment levels (control, low, and high) and two vegetation treatments (unplanted and planted with alfalfa (<italic>Medicago sativa</italic>)). BDE 47, BDE 209, TBB, TBPH, and triclosan declined significantly in the high biosolid-amended vegetated soil between Days 0 and 28 (p < 0.05), and then reached a plateau between Days 28 and 90 during which no further significant loss from soil was observed. In contrast, no significant losses of those analytes were observed from soil at the high biosolids amendment in non-vegetated pots. The percent of a given analyte lost from the vegetated soil at the high amendment between Day 0 and the plateau ranged from 43.1% for TBPH to 60.9% for triclosan and was significantly and negatively related to the log octanol-water partition coefficient (log K<sub>OW</sub>) of the analyte (p = 0.0103, R<super>2</super> = 0.9178) and marginally significantly and positively related to the log of water solubility (p = 0.0686, R<super>2</super> = 0.7213). Alfalfa root and shoot tissues were monitored for the analytes of interest but no clear evidence of phytoaccumulation was observed. Methyl triclosan formation was observed in the biosolid-amended soils during the study period, indicating that biotransformation played a role in the observed dissipation of triclosan. The results of Chapter 4 demonstrate that PBDEs, selected alternate BFRs and triclosan are highly recalcitrant in biosolid-amended soils but capable of undergoing dissipation in the presence of alfalfa and, in the case of triclosan, biotransformation.

In conclusion, this dissertation provides a comprehensive view of the fates of flame retardants and triclosan in biosolid-amended soil, identifying markers of degradation that can be used in complex real-world scenarios, developing methods for measurement of a diverse suite of analytes in biosolids and plant tissues, and demonstrating the persistence of these compounds in biosolid-amended soil.