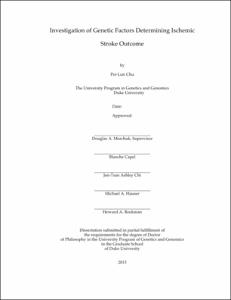 Cerebrovascular disease (stroke), especially ischemic stroke, is a major cause of death and neurological disability in adults. Because of its clinical heterogeneity, stroke is considered as a multi-factorial and polygenic disorder. Most current genetic studies of ischemic stroke focus on genetic susceptibility rather than factors determining stroke outcome. The genetic components of ischemic stroke outcome are difficult to study in humans due to environmental factors and medical intervention. Thus, we proposed to use a surgically induced, permanent, focal cerebral ischemic stroke mouse model to investigate genetic factors of ischemic stroke outcome measured by infarct volume. This model is the middle cerebral artery occlusion (MCAO) model. First, we screened infarct volumes across 32 inbred mouse strains. The infarct volume varies between strains, and this strongly suggests that infarct volume is genetically determined. To identify these genetic factors, we used genome-wide association study [Efficient Mixed-Model Association (EMMA) analysis] on infarct volume from 32 inbred mouse strains. Using the EMMA analysis, we identified 11 infarct volume-associated loci; however, most loci were mapped with missing alleles. This suggests that these loci might be false positives. Thus, we used specifically designed scripts of EMMA analysis with updated mouse SNP database to correct for potential false positives. The loci identified by the updated EMMA analyses will led us to the identification of genes involved in ischemic stroke outcome.