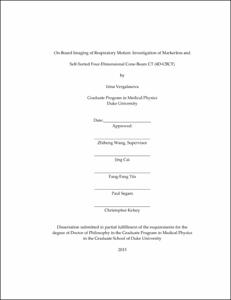 To date, image localization of mobile tumors prior to radiation delivery has primarily been confined to 2D and 3D technologies, such as fluoroscopy and 3D cone-beam CT (3D-CBCT). Due to the limited information from these images, larger volumes of healthy tissue are often irradiated in order to ensure the radiation field encompasses the entirety of the target motion. Since the overarching goal of radiation therapy is to deliver maximum dose to cancerous cells and simultaneously minimize the radiation delivered to healthy surrounding tissues, it would be ideal to use 4D imaging to obtain time-resolved volume images of the tumor motion during respiration.

4D-CBCT imaging has been previously investigated, but has not yet seen large clinical translation due to the obstacles of long acquisition time and large image radiation dose. Furthermore, 4D-CBCT currently requires the use of external surrogates to correlate the patient's respiration with the image acquisition process. This correlation has been under question by a multitude of studies demonstrating the uncertainties that exist between the surrogate and the actual motion of the internal anatomy. Errors in the correlation process may result in image artifacts, which could potentially lead to reconstructions with inaccurate target volumes, thereby defeating the purpose of even using 4D-CBCT.

It is therefore the aim of this dissertation to initially highlight an additional limitation of using 3D-CBCT for imaging respiratory motion and thereby reiterate the need for 4D-CBCT imaging in the treatment room, develop a simple and efficient technique to achieve markerless, self-sorted 4D-CBCT and finally to comprehensively evaluate its robustness across a variety of potential clinical scenarios with a digital human phantom.

People often spend a longer period of time exhaling as compared with inhaling, and some do so in an extremely disproportionate manner. To demonstrate the disadvantage of using 3D-CBCT in such instances, a dynamic thorax phantom was imaged with a large variety of simulated and patient-derived respiratory traces of ratios of time spent in the inspiration phase versus time spent in the expiration phase (I/E ratio). Canny edge detection and contrast measures were employed to compare the internal target volumes (ITVs) generated per profile. The results revealed that an I/E ratio of less than one can lead to potential underestimation of the ITV with the severity increasing as the inspiration becomes more disproportionate to the expiration. This occurs because of the loss of contrast in the inspiration phase, due to the fewer number of projections acquired there. The measured contrast reduction was as high as 94% for small targets (0.5 cm) moving large amplitudes (2.0 cm) and still as much as 22.3% for large targets (3.0 cm) moving small amplitudes (0.5 cm). This is alarming because the degraded visibility of the target in the inspiration phase may inaccurately impact the alignment of the planning ITV with that of the FB-CBCT and thereby affect the accuracy of the localization and consequent radiation delivery. These potential errors can be avoided with the use of 4D-CBCT instead, to form the composite volume and serve as the verification ITV for alignment.

In order to delineate accurate target volumes from 4D-CBCT phase images, it is crucial that the projections be properly associated with the patient's respiration. Thus, in order to improve previously developed 4D-CBCT techniques, the basics of Fourier Transform (FT) theory were utilized to extract the respiratory signal directly from the acquired projection data. Markerless, self-sorted 4D-CBCT reconstruction was achieved by developing methods based on the phase and magnitude information of the Fourier Transform. Their performance was subsequently compared to the gold standard of visual identification of peak-inspiration projections. Slow-gantry acquired projections of two sets of physical phantom data with sinusoidal respiratory cycles of 3 and 6 seconds as well as three patients were used as initial evaluation of the feasibility of the Fourier technique. Quantitative criteria consisted of average difference in respiratory phase (ADRP) and percentage of projections assigned within 10% respiratory phase of the gold standard (PP10). For all five projection datasets, the results supported feasibility of both FT-Phase and FT-Magnitude methods with ADRP values less than 5.3% and PP10 values of 87.3% and above.

Because the technique proved to be promising in the initial feasibility study, a more comprehensive evaluation was necessary in order to assess the robustness of the technique across a larger set of possibilities that may be encountered in the clinic. A 4D digital XCAT phantom was used to generate an array of respiratory and anatomical variables that affect the performance of the technique. The respiratory variables studied included: inspiration to expiration ratio, respiratory cycle length, diaphragmatic motion amplitude, AP chest wall expansion amplitude, breathing irregularities such as baseline shift and inconsistent peak-inspiration amplitude, as well as six breathing profiles derived from cine-MRI images of three healthy volunteers and three lung cancer patients. The anatomical variables studied included: male and female patient size (physical dimension and adipose content), body-mass-index (BMI) category, tumor location, and percentage of the lung in the field-of-view (FOV) of the projection data. CBCT projections of each XCAT phantom were then generated. Additional external imaging factors such as image noise and detector wobble were added to select cases with different percentages of lung in the projection FOV to investigate any effects on the robustness. FT-Phase and FT-Magnitude were each applied and quantitatively compared to the gold standard. Both methods proved to be robust across the studied scenarios with ADRP<10% and PP10>90%, when incorporating minor modifications to region-of-interest (ROI) selection and/or low-frequency location to certain cases of diaphragm amplitude and lung percentage in the FOV of the projection (for which a method may have previously struggled). Nevertheless, in the instance where one method initially faltered, the other method prevailed and successfully identified peak-inspiration projections. This is promising because it suggests that the two methods provide complementary information to each other. To ensure appropriate clinical adaptation of markerless, self-sorted 4D-CBCT, perhaps an optimal integration of the two methods can be developed.