Fanny Hensel, Felix Mendelssohn Bartholdy, and the Formation of the "Mendelssohnian" Style 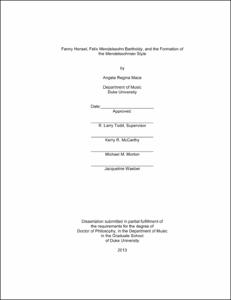 Fanny Hensel wrote much of Felix Mendelssohn's music. Or so goes the popular misconception. It is true that Felix did publish six of his sister's Lieder under his own name, in his Op. 8 and Op. 9, but there is no evidence that anything else he published was actually by Fanny. The perpetuation of this idea is by no means new to our century; even during her lifetime, Fanny received letters alluding to the possibility that some of her music was masquerading as Felix's. But how could this supposition even be possible?

Complicating our reception of Hensel's works and our knowledge of her influence over him, and perpetuating our misconception (and perhaps hopes) that some of Felix's music was by Fanny was the unavailability of her music to the general public. For most of the twentieth century, she was known mostly by her eleven published opera (five of which were released posthumously). Before she was able to plan and accomplish any sort of systematic publication of her works, she died suddenly, at the age of 41, leaving behind upwards of 450 unrevised, unpublished works.

Clearly, we need to reconsider the term "Mendelssohnian," and bring Hensel to the foreground as an equal partner in forming the Mendelssohns' common style. I examine the roots of the "Mendelssohnian" style in their parallel musical educations, their shared enthusiasm for the music of Bach, and their simultaneous collision with Beethoven's music (and the diverse ways each responded to his influence). I explore in detail the relationship between Fanny, Felix, and her fiancé Wilhelm Hensel through the methodology of kinship studies, to contextualize what some have viewed as a quasi-incestuous sibling relationship within the norms for sibling communication in the nineteenth century. Finally, I discuss how deeply their separation after 1829 affected both Fanny and Felix, and how Fanny negotiated her changing life roles and ambitions as a composer and performer.

One work that Fanny never released, and, indeed, one work that has remained a mystery, is the Ostersonate (Easter Sonata). Believed lost since it was first mentioned in correspondence in 1829, the sonata resurfaced in the twentieth century, when it was recorded and attributed to Felix, and then disappeared again without a trace. In the absence of any identifiable manuscript, it had been impossible to definitively challenge this attribution. My research represents a major breakthrough: I traced the manuscript to a private owner and positively identified it as the work of Fanny Mendelssohn.