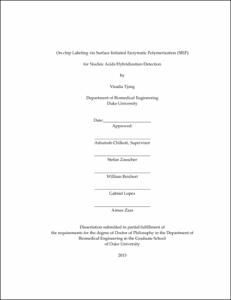 We name this technique Surface Initiated Enzymatic Polymerization (SIEP), where we exploit the ability of a template independent DNA polymerase called Terminal Deoxynucleotidyl Transferase (TdT) to catalyze the formation of long single-stranded DNA (ssDNA) chain from the 3'-end of a short DNA primer, which is tethered on the surface, and TdT's ability to incorporate unnatural reporter nucleotides, such as fluorescent nucleotides. We hypothesize that polymerization of a long ssDNA chain while incorporating multiple fluorescent nucleotides on target DNA or RNA hybridized to probe printed on a surface will provide a simple and powerful, isothermal method for on-chip labeling and signal amplification.

We developed the SIEP methodology by first characterizing TdT biochemical reaction to polymerize long homopolymer ssDNA (> 1000 bases) starting from the 3'-OH of ten bases oligonucleotides. We found that the preferred monomers (deoxynucleotide, dNTP) are dATP and dTTP, and that the length of the ssDNA extension is determined by the ratio of input monomer (dNTP) to initiator (short oligonucleotides). We also investigated TdT's ability to incorporate fluorescent dNTPs into a ssDNA chain by examining the effect of the molar ratios of fluorescent dNTP to natural dNTP on the initiation efficiency, the degree of fluorophore incorporation, the length and the polydispersity of the polymerized DNA strand. These experiments allowed us to incorporate up to ~50 fluorescent Cy3-labeled dNTPs per kilobase into a ssDNA chain. With the goal of using SIEP as an on-chip labeling method, we also quantified TdT mediated signal amplification on the surface by immobilizing ssDNA oligonucleotide initiators on a glass surface followed by SIEP of DNA. The incorporation of multiple fluorophores into the extended DNA chain by SIEP translated to a up to ~45 fold increase in signal amplification compared to the incorporation of a single fluorophore.

SIEP was then employed to detect hybridization of DNA (25 bases), short miRNA (21 bases) and long mRNA (1400 bases) by the post-hybridization, on-chip polymerization of fluorescently labeled ssDNA that was grown from the 3'-OH of hybridized target strands. A dose-response curve for detection of DNA hybridization by SIEP was generated, with a ~1 pM limit of detection (LOD) and a 2-log linear dynamic range while the detection of short miRNA and fragmented mRNA targets resulted in ~2 pM and ~10 pM LOD, respectively with a 3-log linear dynamic range.

We further developed SIEP for colorimetric detection by exploiting the presence of negatively charged phosphate backbone on the surface as target DNA or RNA hybridizes on the immobilized probe. The net negative charge on the surface is further increased by TdT catalyzed polymerization of long ssDNA. We then used positively charged gold nanoparticles as reporters, which can be further amplified through electroless metallization, creating DNA spots that are visible by eye. We observed an increase of 100 fold in LOD due to SIEP amplification.

Overall, we demonstrated the use of SIEP methodology to label unmodified target DNA and RNA on chip, which can be detected through fluorescence signal or colorimetric signal of metallized DNA spots. This methodology is straightforward and versatile, is compatible with current microarray technology, and can be implemented using commercially available reagents.