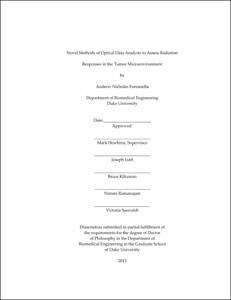 The vascular contribution to tumor radiation response is controversial, but may have profound clinical implications. This is especially true of a new class of radiation therapies which employ spatial fractionation techniques--high radiation doses delivered in a spatially modulated pattern across the tumor. Window chamber tumor models may prove useful in investigating vascular parameters due to their facilitation of non-invasive, serial measurements of living tumors. However, presently there do not exist automated and accurate algorithms capable of quantitatively analyzing window chamber data.

Here we attempt to address these two problems through (1) the generation of novel optical data processing techniques for the quantification of vascular structural and functional parameters, and (2) the application of these methods to the study of vascular radiation effects in window chamber models.

Results presented here demonstrate the versatility and functionality of the data processing methods that we have developed. In the first part of Aim 1, we have developed a vessel segmentation algorithm specifically designed for processing tumor vessels, which present a challenge to existing algorithms due to their highly branching, tortuous structure. This provides us with useful information on vascular structural parameters. In the second part of Aim 1, we demonstrate a complementary vascular functional analysis algorithm, which generates quantitative maps of speed and direction. We prove the versatility of this method by applying it to a number of different studies, including hemodynamic analysis in the dorsal window chamber, the pulmonary window, and after neural electro-stimulation. Both the structural and functional techniques are shown capable of generating accurate and unbiased vascular structural and functional information. Furthermore, that automated nature of these algorithms allow for the rapid and efficient processing of large data sets. These techniques are validated against existing techniques.

The application of these methods to the study of vascular radiation effects produced invaluable quantitative data which suggest startling tumor adaptations to radiation injury. Window chamber grown tumors were treated with either widefield, microbeam, or mock irradiation. After microbeam treatment, we observed a profound angiogenic effect within the radiation field, and no signs of vascular disruption. Upregulation of HIF-1, primarily in the tumor rim, suggested that this response may have been due to bystander mechanisms initiated by oxidative stress. This HIF-1 response may have also initiated an epithelial-mesenchymal transition in the cells of the tumor rim, as post-treatment observation revealed evidence of tumor cell mobilization and migration away from the primary tumor to form secondary satellite clusters. These data indicate the possibility of significant detrimental effects after microbeam treatment facilitated through a HIF-1 response.