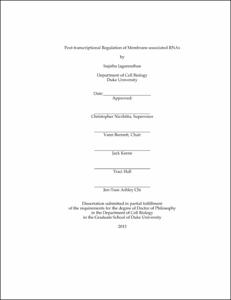 RNA localization provides the blueprint for compartmentalized protein synthesis in eukaryotic cells. Current paradigms indicate that RNAs encoding secretory and membrane proteins are recruited to the endoplasmic reticulum (ER), via positive selection of a `signal peptide' tag encoded in the protein. Thus RNA sorting to the ER follows protein sorting and the RNA is considered a passive player. However, RNAs have been shown to access the ER independent of the signal peptide and display a wide range of affinities to the ER that does not correlate with signal peptide strength. How and why mRNAs localize to the ER to varying extents and whether such localization serves a purpose besides protein sorting is poorly understood. To establish the cause and consequence of RNA binding to the ER membrane, I pose three primary questions: 1. How are mRNAs targeted to the ER? 2. Once targeted, how are mRNAs anchored to the ER membrane? 3. Are ER localized mRNAs subject to transcript-specific regulation?

I address cytosolic mRNA targeting to the ER by comparing the partitioning profiles of cytosolic/nuclear protein-encoding mRNA population (mRNACyto) to that of mRNAs encoding a signal peptide (mRNAER). I show that, at a population level, mRNACyto display a mean ER enrichment that is proportional to the amount of ER-bound ribosomes. Thus, I propose that targeting of mRNACyto to the ER is stochastic and over time, the specific interactions engaged by an individual mRNACyto with the ER determines its steady state partitioning profile between the cytoplasm and the ER.

To address the modes of direct binding of mRNA to the ER, I examined the association of various RNA populations with the ER after disrupting membrane-bound ribosome's interaction with its ER receptor. mRNACyto and most of mRNAs encoding secretory proteins (mRNACargo) are released upon disruption of ribosome-receptor interactions, indicating no direct mRNA-ER interactions. However, the population of mRNAs that encode resident proteins of the endomembrane organelles such as the ER, lysosome, endosome and the Golgi apparatus (mRNARes) maintain their association with the ER despite the disruption of ribosome-receptor interactions. These results indicate direct binding of mRNARes to the ER, further suggesting that the function of the encoded proteins dictates the mode of association of corresponding mRNA with the ER.

To uncover the mode of mRNARes binding directly to ER, I performed differential proteomic analysis of cytosolic and membrane bound RNA-protein complexes, which revealed a network of RNA binding proteins that interact uniquely with the ER-anchored mRNAs. The anchoring of endomembrane resident protein-encoding RNAs to the ER through these RNA binding proteins may reflect an imprinting of the ER with the information necessary for the continued biogenesis of the endomembrane organelle system even in situations where translation-dependent ER targeting of an mRNA is compromised.

Finally, I address whether ER-bound mRNAs can be regulated differentially by comparing the fates of two signal peptide-encoding RNAs, B2M and GRP94, during the unfolded protein response (UPR). I show that in response to ER stress, GRP94 mRNA, but not B2M, relocates to stress-induced RNA granules, thus escaping an RNA decay program that operates at the ER membrane during the UPR. Hence, I propose that the mode of RNA association to the ER is subject to regulation and influences the fate of RNAs during cellular stress. Thus, by demonstrating diverse modes of mRNA localization to the ER and differential regulation of ER bound mRNAs during cellular stress, my work has helped establish an emerging role for the ER as a post-transcriptional gene regulatory platform.