Nonlinear Dynamics and Network Properties in Granular Materials under Shear 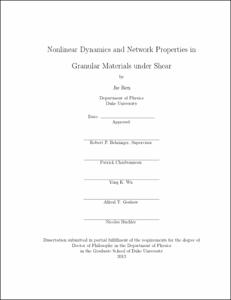 Granular materials are hard to understand due to their discrete and a-thermal nature. The mechanical response of a granular packing under external deformations, although highly relevant in industrial processes, is still poorly understood, partly due to the difficulty to generate a homogeneous granular packing. In this thesis, I present a novel shear apparatus that avoids the formation of inhomogeneities known as shear bands. This apparatus provides quasi-static, quasi-uniform simple shear deformation to a 2D model granular system under fixed packing fraction &phi. The position, orientation and forces for each particle are obtained at each shear step, using the photo-elastic technique. This model granular system exhibits coupling between the shear strain, &gamma, and the pressure, P, which we characterize by the `Reynolds pressure', and a `Reynolds coefficient', R(&phi) = (&partial^2 P/ &partial &gamma^2)/2. Under cyclic shear, this system evolves logarithmically slowly towards limit cycle dynamics, which we characterize in terms of pressure relaxation at cycle n: &Delta P &simeq - &beta ln(n/n_0). &beta depends only on the shear cycle amplitude, suggesting an activated process where &beta plays a temperature-like role. In addition, particles in the sheared system are diffusive. The translational and rotational diffusion, observed under stroboscopic view during cyclic shear, are observed to depend on the packing fraction but not on the stress states of the system. Finally, the structure of the force network, and how that connects to the mechanical behavior, is also briefly discussed.