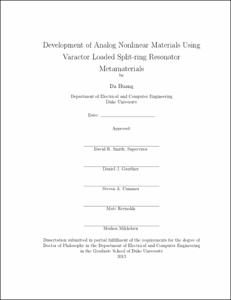 As research in electromagnetics has expanded, it has given rise to the examination of metamaterials, which possess nontrivial electromagnetic material properties such as engineered permittivity and permeability. Aside from their application in the microwave industry, metamaterials have been associated with novel phenomena since their invention, including sub-wavelength focusing in negative refractive index slabs, evanescent wave amplification in negative index media, and invisibility cloaking and its demonstration at microwave frequency with controlled material properties in space.

Effective medium theory plays a key role in the development and application of metamaterials, simplifying the electromagnetic analysis of complex engineered metamaterial composites. Any metamaterial composite can be treated as a homogeneous or inhomogeneous medium, while every unit structure in the composite is represented by its permittivity and permeability tensor. Hence, studying an electromagnetic wave's interaction with complex composites is equivalent to studying the interaction between the wave and an artificial material.

This dissertation first examines the application of a magnetic metamaterial lens in wireless power transfer (WPT) technology, which is proposed to enhance the mutual coupling between two magnetic dipoles in the system. I examine and investigate the boundary effect in the finite sized magnetic metamaterial lens using a numerical simulator. I propose to implement an anisotropic and indefinite lens in a WPT system to simplify the lens design and relax the lens dimension requirements. The numerical results agree with the analytical model proposed by Smith et al. in 2011, where lenses are assumed to be infinitely large.

In addition to 1D nonlinear processes, this dissertation also introduces the first 2D microwave nonlinear field mapping apparatus, which is capable of simultaneously capturing both the magnitude and phase of generated harmonic signals from nonlinear metamaterial mediums. I designed a C-band varactor loaded SRR that is matched to the frequency and space limitation of the 2D mapper. The nonlinear field generation and scattering properties from both a single nonlinear element and a nonlinear metamaterial medium composite are experimentally captured in this 2D mapper, and the results qualitatively agree with numerical results based on the effective medium model.