The Political Representation of Non-Citizen Latinos: An Analysis of Legislative Motivations 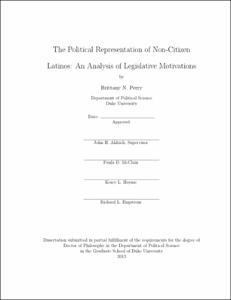 This dissertation examines the political representation of non<&ndash>citizen Latinos in the U.S. states. Specifically, it investigates why lawmakers, seen as primarily driven by the goal of reelection, would be compelled to vote for or sponsor legislation to favor this non<&ndash>citizen, non<&ndash>voting population.

Using newly collected data on bill sponsorship and roll call voting, combined with data collected from an original survey of current state lawmakers, I test a more nuanced version of David Mayhew<&rsquo>s reelection theory. I examine the short<&ndash>term and long<&ndash>term reelection goals of lawmakers finding that both current and potential future voting populations in a district (including non<&ndash>citizens) have significant effects on voting and sponsorship decisions. In addition, I find evidence to suggest that personal characteristics of a lawmaker, most notably ethnic identity, also affect legislative behavior. In line with an alternative <&ldquo>good public policy theory,<&rdquo> my results demonstrate that even when electoral pressures are low, Latino lawmakers remain significantly more likely to support non<&ndash>citizen interests when compared to all other lawmakers. The broader implication of this finding is that descriptive representation matters and the identity link between Latino legislators and non<&ndash>citizen Latinos in society encourages behavior that is not fully explained by standard reelection theories.