Black Sacred Breath: Historicity, Performance and the Aesthetics of BlackPentecostalism 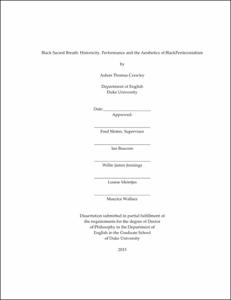 "Black Sacred Breath: Historicity, Performance and the Aesthetics of BlackPentecostalism" considers are the aesthetic practices found in BlackPentecostalism, a multiracial, multi-class, multi-national Christian sect that began in Los Angeles, California in 1906 to argue that the aesthetic practices are the condition of possibility for a performative assessment and antiphonal criticism of normative theology and philosophy. Indeed, the history of these performances is an atheological-aphilosophical project, produced against the grain of liberal logics of subjectivity. By showing that theology and philosophy were abstractions of thought that produced the conceptual body as the target of racialization, the atheological-aphilosophical couplet indexes modes of intellectual practice that engulf and exceed such reductivism. BlackPentecostalism is a social, musical, intellectual form of new life, predicated upon the necessity of ongoing new beginnings. The religious practices I analyze produce a range of common sensual experiences: of "shouting" as dance; "testimony" and "tarry service" as song and praise noise; "whooping" (ecstatic, eclipsed breath) that occurs in praying and preaching; as well as, finally, "speaking in tongues." I ultimately argue that these aesthetic practices and sensual experiences are not only important objects of study for those interested in alternative modes of social organization, but they also yield a general hermeneutics, a methodology for reading culture.

During the antebellum era, both clergy and scholars alike levied incessant injunctions against loud singing and frenzied dancing in religion and popular culture. Calling for the relinquishment of these sensual spiritual experiences, I argue that these framing injunctions led to a condition where BlackPentecostal aesthetics, even in the much later institutional Black Studies, were and are thought as excessive performances. "Black Sacred Breath" investigates how discourses that emerged within the cauldron of spatiotemporal triangular trades in coffee, tea, sugar and human flesh of Transatlantic slavery necessitated a theology and philosophy of race, and consequently, the racializing of aesthetic practices. Over and against this discursive theology-philosophy were the performance practices of BlackPentecostalism, an atheology-aphilosophy. These sensual experiences were not merely performed through duress but were the instantiation and sign of love, of life. As love and life, these performative dances, songs, noises and tongues illustrate how enjoyment, desire and joy are important for the historicity - the theory of history found in these practices - that antiphonally speaks back against aversion, embarrassment and abandonment, against the debasement and denigration of blackness. Fundamentally, "Black Sacred Breath" is about the possibility for Black Study (as opposed to and differentiated from university institutional Black Studies), about the capacity for aesthetic practices typically deemed excessive can be constitutive, can provide new models for collective intellectual practice.