The Effects of Matching Post-transgression Accounts to Targets' Preferences 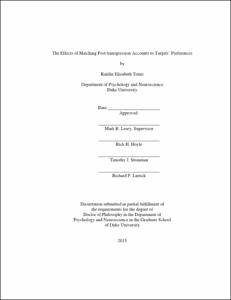 Previous research into accounts--the statements that people make to explain undesirable behavior--has looked at either the target's reactions to accounts or the transgressors' account strategies, but has not looked at these together. In four studies, participants were assigned to the role of a transgressor (the person providing a post-transgression account) or a target. Transgressors' use of accounts--excuses, justifications, and exceptions--and their post account expectations for how they and the target would react was measured. These transgressor ratings were then compared to the account preferences and reactions (evaluative and punitive) of the targets who actually read the accounts. Targets whose account preferences were matched were expected to react more positively and to inflict lesser penalties on transgressors than those whose preferences were not matched. Results showed that transgressors were fairly inaccurate in their estimations of target reactions, and did not tend to match the account preferences of their targets. However, some evidence emerged to suggest that targets did generally react positively when their account preferences were matched. Furthermore, the domain of the transgression (whether it was a moral, environmental, religious, or interpersonal transgression) affected the strength and direction of these effects.