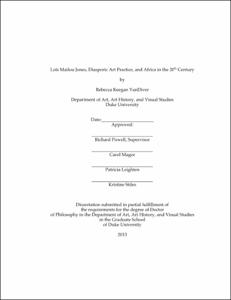 This dissertation, Loïs Mailou Jones, Diasporic Art Practice, and Africa in the 20th Century, investigates the evolving dialogue between twentieth-century African-American artists and Africa--its objects, peoples, diasporas, and topography. The four chapters follow the career of artist Loïs Mailou Jones (1905-1998) and focus on periods when ideas about blackness in an African-American context and its connection to Africa were at the forefront of artistic and cultural discourses. Chapter 1 traces African-American artists contact with African art during the first decades of the twentieth century. Chapter 2 examines Jones's use of Africa in her art produced at the start of her career (1920s -1940s) and repositions her in relation to the Harlem Renaissance and Négritude movements. Chapter 3 considers Jones's engagements with the African Diaspora via travels to France, the Caribbean, and Africa in the 1960s and 1970s, voyages that I argue result in the creation of a Black Diasporic art practice predicated upon the act of viewing. Chapter 4 critiques the signifying grasp of Africa in African American art. By looking at Jones's turn to pastiche as an aesthetic choice and cultural commentary, the chapter argues that that the possibility of a seamless reconciliation of Africa in African American art is impossible. Where the limited scholarly discourse on the subject has emphasized a heritage-based relationship between Black artists and Africa, this project's cross-cultural approach is one of the first to consider the relationship between Africa and Black artists that goes beyond looking for African retentions in African American culture. In doing so the project also suggests an alternative to the internationalization of American artists in African, rather than European terms. Moreover, though Jones is broadly cited within African American art history beyond monographic considerations her work has yet to be critically examined particularly in regards to larger debates concerning blackness and the African Diaspora.