Marriage Formation and Dissolution in the United States 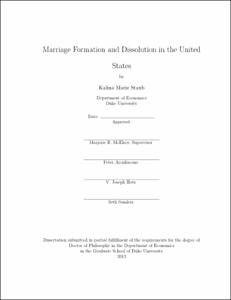 The second chapter is joint work with my advisor Marjorie McElroy and Tongyai Iyavarakul which presents a new approach to the reduced-form estimation of dynamic models using aggregated panel data. With forward looking behaviors, exogenous changes in laws or rules give rise to selection effects on those considering entry and surprise effects for those who have already entered. We develop a model, the Cohort Panel Data Model (CPDM), to examine the effects of divorce law changes on divorce rates. Our analysis has several key features. First, we introduce the concept of a marriage cohort, a group of people married under a certain set of laws. The calculation of the shares of the population in each marriage cohort is a key element of our aggregation protocol. Second, the model includes floodgate effects, a spike in the divorce rate followed by a decline, resulting from heterogeneity within these marriage cohorts. Lastly, we develop a wait-time index for the cost of divorce and carefully code divorce laws based on two dimensions: costs and rights. Thus the model allows for an unbiased test of the Coase Theorem since our model gives the surprise effect of a change in the rights to divorce holding costs constant. Results strongly support the idea that unanticipated divorce law changes affected divorce rates, but finds that these effects are operating through changing costs and not changes in rights (supporting the Coase Theorem). Additionally, lower divorce costs are found to increase divorce rates through the selection of less well-matched couples into marriage. Finally we reconcile our results with previous studies by showing that previous studies that do not differentiate between costs and rights suffer from omitted variables bias and improper aggregation over marriage cohorts.