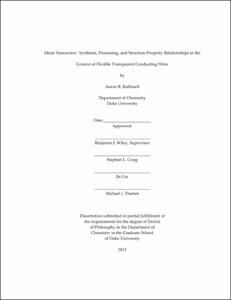 The demand for flat-panel televisions, e-readers, smart-phones, and touch-screens has been increasing over the past few years and will continue to increase for the foreseeable future. Each of these devices contains a transparent conductor, which is usually indium tin oxide (ITO) because of its high transparency and low sheet resistance. ITO films, however, are brittle, expensive, and difficult to deposit, and because of these problems, alternative transparent electrodes are being studied. One cheap and flexible alternative to ITO is films of randomly oriented copper nanowires. We have developed a synthesis to make long, thin, and well-dispersed copper nanowires that can be suspended in an ink and coated onto a substrate to make flexible transparent films. These films are then made conductive by annealing in a hydrogen atmosphere or by a solution processing technique that can be done in air at room temperature. The resulting flexible transparent conducting films display transparencies and sheet resistance values comparable to ITO.

To further optimize the properties of our transparent conductors we developed a framework to understand how the dimensions and area coverage of the nanowires affect the overall film properties. To quantify the effect of length on the sheet resistance and transmittance, wires with different lengths but the same diameter were synthesized to make transparent conducting films and finite-difference time-domain calculations were used to determine the effect of the nanowire diameter on the film's transmittance. The experimental data and calculations were then incorporated into random resistor network simulations that demonstrated that wires with an aspect ratio of 400 or higher are required to make a network that transmits >90% of visible light while maintaining a sheet resistance below 100 Ohm/sq.

These properties, and the fact that copper and nickel are 1000 times more abundant than indium or silver, make copper and cupronickel nanowire films a promising alternative for the sustainable, efficient production of transparent conductors.