The Relation Between Self-Regulation and Academic Achievement: A Meta-Analysis Exploring Variation in the Way Constructs are Labeled, Defined, and Measured 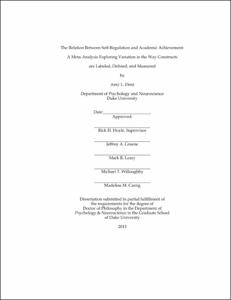 Guided by an integrative conceptual framework, a meta-analysis was conducted to explore the relation between the capacity aspect of self-regulation and academic achievement across childhood and adolescence. This meta-analysis of over 150 studies draws upon diverse research traditions and approaches to test moderators of theoretical, methodological, and practical importance. In the theoretical moderator analyses, results were broken down by the specific self-regulation construct (e.g., emotion regulation, executive functions), students' grade level, and academic subject. Doing so permitted an exploration of developmental and domain differences in the relation between each self-regulation construct and achievement. In the methodological moderator analyses, results were broken down by the type of self-regulation measure (e.g., teacher-report, direct assessment) and the type of achievement measure (e.g., standardized test, course grade). Doing so permitted a formal test of how these measures relate to each other, which has garnered considerable debate among self-regulation researchers.

Findings from the five moderator analyses largely supported hypotheses. The average correlation with achievement was strongest for effortful control and composite measures of executive functions, with updating significantly exceeding both shifting and inhibiting. A strong correlation also emerged for self-control, though it differed significantly based on whether the construct was categorized by author labels or definitions. Composite measures of self-regulation revealed a stronger correlation with achievement than any of its domains, as expected. Across all self-regulatory capacities, correlations became significantly stronger after the transition to kindergarten but assumed different trajectories based on the specific construct during the rest of elementary and secondary school. Domain differences also emerged, favoring math and science for executive functions but not producing significant differences with language arts for effortful control. As expected, self-regulatory capacities with an indirect effect on achievement (e.g., effortful control, emotion regulation) had the strongest correlation with course grades while self-regulatory capacities with a direct effect on achievement (e.g., executive functions) had the strongest correlation with standardized tests. Finally, direct assessments and teacher reports produced significantly stronger correlations with academic performance than when students reported their own self-regulation. Theoretical, methodological, and practical implications of these findings are discussed alongside results.

A new meta-analytic method was also developed to identify and resolve inconsistencies in the way psychological constructs are labeled, defined, and measured. This new method provided needed conceptual clarity in the diverse and interdisciplinary literature on self-regulation. Implications for other literatures characterized by variation in the way constructs are labeled, defined, and measured are discussed.