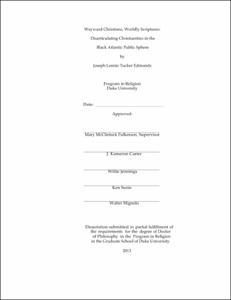 This dissertation will engage in a historical-critical encounter with a peculiar subset of lived Christian traditions in the black Atlantic world, and the ways in which black theology as a disciplinary formation has only partly included these competing constructions of Christianity in their account of marginalized and marooned peoples. This project will do three things. First it will explore theoretically the construction of a black Atlantic world and re-establish a genealogy of lived Christian traditions in the black Atlantic world that takes seriously a set of movements emerging at the beginning of the twentieth century (primarily 1915-1955). These movements unsettled the monolithic depiction of the black church as western and primarily connected to a European or Euro-American theological tradition. The movements also help us to rethink the black Atlantic sphere as not simply the dispersion of African bodies to regions predominately bordering the Atlantic Ocean and the resulting demographic transformation of these new world spaces, but more appropriately as the collection of spaces (often exceeding the regions bordering the Atlantic) in which black cultures have been contested, shaped, and informed by the legacies of enslavement, colonialism, and capitalism/modernity. It is my contention that by using the lenses of the black Atlantic and scripturalizing to return to this important archive of black Atlantic religious traditions we not only have access to the variety of black Christian experiences in a transnational frame, but we are able to redefine the scope of black theology and more fully engage the complex performances of black religious traditions in the public sphere.