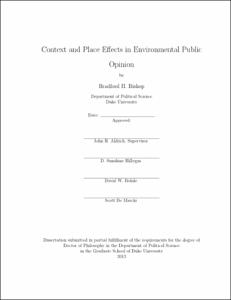 Environmental attitudes have interested scholars for decades, but researchers have insufficiently appreciated the low salience of the environment, and the enormous complexity of this issue area. In this dissertation, I investigate how these features influence the way ordinary citizens think about the environment.

Research into the dynamics of public opinion has found a generic relationship between policy change and public demands for activist government. Yet, less is known about the relationship between policy and attitudes in individual issue areas. In the first chapter, I investigate the influence of a variety of factors on public opinion in a particularly complex policy area---the environment. To study the short-run and long term dynamics of environmental public opinion, I generate an annual metric of environmental attitudes running from 1974 to 2011. Consistent with prior research, I find the economy and major environmental disasters play an important role in aggregate environmental opinion. However, actual policy innovations are found to play only a limited role in attitude formation. Instead, the party label of the president appears to affect demand for environmental activism, when other factors are held constant.

Scholarly research has found a weak and inconsistent role for self-interest in public opinion, and mixed evidence for a relationship between local pollution risks and support for environmental protection. In the second chapter, I argue that focusing events can induce self-interested responses from people living in communities whose economies are implicated by the event. I leverage a unique 12-wave panel survey administered between 2008 and 2010 to analyze public opinion toward offshore oil drilling before and after the Deepwater Horizon oil spill. I find that residence in counties highly dependent upon the offshore drilling industry was predictive of pro-drilling attitudes following the spill, though not prior to the spill. In addition, there is no significant evidence that residence in a county afflicted by the spill influenced opinion. This chapter concludes that local support for drilling often arises only after focusing events make the issue salient.

Previous research into place effects has provided mixed evidence about the effect of geography on public opinion. Much of the work finding a relationship is susceptible to methodological criticisms of spuriouness or endogeneity. In the third chapter, I leverage a unique research design to examine the influence of residential setting on environmental attitudes regarding water use. The findings indicate that local drought conditions increase individuals' level of concern about the nation's water supply. In addition, drought conditions are related to public attitudes towards water use regulation, with those living in drought-afflicted counties more likely to support government regulation. This chapter provides a firm foundation for research attempting to demonstrate that local conditions have a causal effect on public opinion.