The People's Republic of Capitalism: The Making of the New Middle Class in Post-Socialist China, 1978-Present 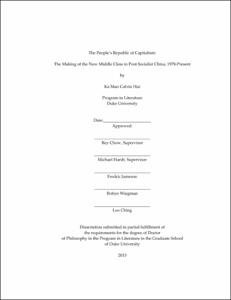 My dissertation, "The People's Republic of Capitalism: The Making of the New Middle Class in Post-Socialist China, 1978-Present" draws on a range of visual cultural forms - cinema, documentary, and fashion - to track the cultural dimension of the emergence of the new middle class subject in China's encounter with global capitalism. Through cultural studies methodologies and critical theoretical practices, I explore the massive reorganization of national subjectivity that has accompanied the economic reforms since 1978. How, I ask, has the middle class replaced the proletariat as the dominant subject of Chinese history? What are the competing social forces that contribute to the making of the new middle class subject, and how do they operate? By considering these questions in terms of the cultural cultivation of new sensibilities as much as identities, I trace China's changing social formations through the realm of cultural productions. This project is organized into three parts, each of which attends to a particular constellation of middle class subjectivities and ideologies. In Part I (Introduction and Chapter 1), I explore how the Chinese middle class subject is shaped by historical, political-economic, and cultural forces. I show that the new social actor is structurally dependent on the national and transnational bourgeoisie and the post-socialist party-state. In Part II (Chapters 2-5), I focus on the relationship among fashion, media, and Chinese consumer culture in the socialist and post-socialist eras. By engaging with films such as Xie Tieli's Never Forget (1964), Huang Zumo's Romance on Lushan (1980), Qi Xingjia's Red Dress is in Fashion (1984), and Jia Zhangke's The World (2004) and Useless (2007), I suggest that the representation of fashion and consumption in Chinese cinema, documentary, and new media is a privileged site for deciphering otherwise imperceptible meanings of class, ideology, and history in the formation of the Chinese middle class subject. In Part III (Chapter 6), I attend to the repressed underside of Chinese consumer culture: rubbish. This project reorients our understanding of socialist and post-socialist China, seeing them as underpinned by the contradictions emblematized in the Chinese middle class.