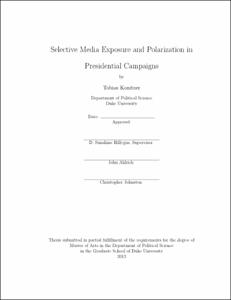 This paper analyzes the influence of political selective exposure to cable news stations on mass-polarization, operationalized as radicalization in issue attitudes during the 2004 Presidential campaign. Various studies have demonstrated at length how political predispositions guide news media choices, which holds especially true for TV news. In contrast, my empirical analyses focus on the effects of exposure to congenial news sources. Using panel data, I show that, first, selective exposure to ideologically leaning cable news has a radicalizing effect on issue attitudes salient in the presidential campaign, even in states where intense campaigning was absent. Second, I demonstrate that the effect of selective exposure on economic attitudes is much more powerful then its effect on social issues. I conclude by discussing the relevance of the findings as well as its long-term implications.