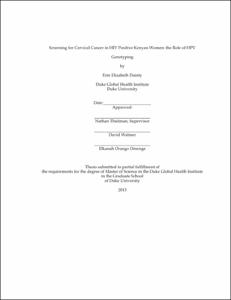 Problem: Among HIV positive women in Kenya, cervical cancer has the highest incidence of any malignancy. In order to create effective screening strategies for both the primary and secondary prevention of cervical cancer in HIV-infected women, an understanding of the natural history of human papillomavirus (HPV) and HIV co infection is critical.

Methodology: This was a cross-sectional study recruiting from two groups: women who have invasive cervical cancer and women who have mild dysplasia. Cervical swabs were collected for genotyping, along with a recent CD4 count and relevant sociodemographic and medical data. HPV genotyping for types 6, 11, 16, 18, 26, 31, 33, 35, 39, 43, 44, 45, 51, 52, 53, 54, 56, 58, 66, 68, 69, 70, 71, 73, 74, and 82 was performing using the INNO-LiPA HPV genotyping assay, SPF10 system version 1 (Innogenetics, Ghent, Belgium). Crude and covariate-adjusted prevalence odds ratios were calculated using logistic regression analysis, and were performed separately for each HPV-type. In addition, modification of HPV-type prevalence ratios by CD4 count was analyzed. All data analysis was performed using Stata 12.1 (College Station, TX).

Conclusions: These findings suggest that duration of HPV infection and host response to infection, rather than HPV genotype or CD4 count, are primarily responsible in the oncogenic transformation of infected cervical tissue. The overwhelming predominance of HPV 52 has implications regarding the efficacy of vaccination against HPV 16 and 18 in the primary prevention of cervical cancer in HIV infected women in Western Kenya.