On the Feasibility of a Novel In-Vivo Dosimeter for Brachytherapy 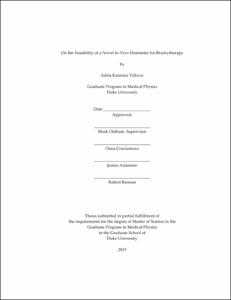 Purpose: Clinical brachytherapy systems are capable of delivering very high doses with high dose gradients. It is important therefore to be able to accurately verify the doses calculated by brachytherapy treatment planning. Current dose verification methods are limited by poor resolution, and in the presence of large dose gradients, may give non-­representative results [1]. This thesis aims to evaluate the feasibility of a novel radiochromic dosimetry system for in-­vivo dose verification in organs at risk (bladder and rectum) in high dose rate (HDR) intracavitary gynecological brachytherapy through a comparison with a gold standard.

Methods: A novel dosimeter PRESAGE®-­IV designed for in-­vivo dosimetry is investigated. PRESAGE®-­IV dosimeters are small cylinders 4mm in diameter by 20mm in height. When irradiated, the dosimeters change color in proportion to the local absorbed dose. The dosimeters were irradiated to doses between 1-­15 Gy. Two methods were investigated for readout of this radiochromic response: (i) a volume averaged readout by conventional spectrophotometer, and (ii) a line profile readout by a novel 2D projection imaging method utilizing a high-­resolution (50 micron) telecentric optical system. Method (i) is considered the gold standard, as it is has been extensively used with PRESAGE® in well-­defined optical-­cuvettes. The feasibility of PRESAGE®-­IV was evaluated by comparison to standard PRESAGE® in optical-­cuvettes. The feasibility of the high-­resolution readout (method ii) was evaluated by direct comparison against method (i). Dosimeters were also tested in-­vivo on six patients undergoing Iridium-­192 HDR intracavitary brachytherapy treatments and dose measurements were compared to Eclipse Treatment Planning System (Varian Medical Systems).

Results: When compared to the gold standard (optical-­cuvettes), the sensitivity and noise of PRESAGE®-­IV shows a linear relationship in sensitivity between 1-­15 Gy with a 95% confidence interval in the slope (0.8703 +/-­ 0.0192). The feasibility of the high-­resolution readout (method ii) evaluated by direct comparison against method (i) resulted in a sensitivity of 0.0136 ± 0.0002 and for the spectrophotometer 0.0135 ± 0.0002, which is a 0.74% difference in sensitivity within the 95% confidence interval. Examination of patient data showed large differences, and on average gave 19% and 22% differences in measured doses vs. Eclipse measurements in the bladder and rectum, respectively.

Conclusions: Results show that a novel radiochromic dosimetry system for in-­vivo dose verification in organs at risk is feasible. The conventional spectrophotometer readout method had the limitation that it averages the change in optical density over a 10 mm area of the dosimeter. The novel, high-­resolution 2D readout technique was found to have the advantage of producing images that could be further analyzed through line profiles in any area of the dosimeter. Due to the large differences in measured doses for organs at risk, further work is needed to validate dosimeter-­positioning technique.