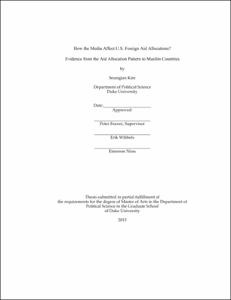 The previous literature fails to reach consensus on the role of media in the foreign aid allocation. My paper attempts to answer following questions by examining Muslim countries: Are there any media effects on the pattern of aid giving? If the media influence the amount of aid, then how does it play its role? In addition, although previous studies show that different donors have prioritized specific groups, no study systemically shows the reason why a donor prioritizes certain recipients. Examining all recipients and donors cannot control the circumstantial factors generated by different regions and ethnicities. In other words, donors allocate international aid to different group of countries for various reasons and much of the research fails to examine the reasons that cannot be generalized.

This paper conducts the OLS time series regression analysis with robust standard errors for U.S. foreign aid allocations, specifically for 46 Muslim/Arab countries. The results of my empirical analysis are threefold. First, Muslim/Arab related factors such as oil reserves, Millennium Challenge Account, and the existence of terrorist groups affect aid variation. Second, the more media attention a country acquires, the more it is likely to receive more generous allocations of aid. Finally, and most importantly, there is a negative interaction effect between the level of media coverage and the number of U.S. soldiers present in that country on aid allocation. When a Muslim recipient maintains more number of U.S. soldiers than the yearly mean U.S. troop level of Muslim countries, the media effect on aid volume decreases. This finding provides guideline for the plausible links around the public, media and governing bodies.