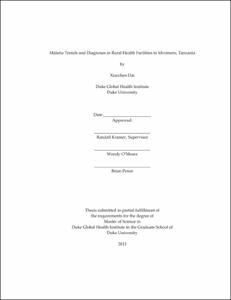 Malaria remains a significant global health challenge. In 2010, an estimated 660,000 people died from malaria and about 90% of all the deaths occurred in Africa. In Tanzania, malaria is the third most burdensome disease with 14 million cases and loss of 15,000 lives each year. This thesis investigates the trends, the diagnostic approaches and the methods of treatment of malaria in health facilities within the Mvomero district. In addition, this thesis examines the impact of environmental factors including precipitation, relative humidity and temperature on the number and burden of malaria cases in health facilities.

To answer the research questions, both quantitative and qualitative methods were employed. A total of 15 health facilities, including dispensaries, health centers and hospitals, were selected to collect data. In each facility, malaria data from 2002 to 2011, including monthly number of malaria cases and total diagnoses, were retrieved from government-required documents for all health facilities in Tanzania. Weather data, including monthly precipitation, average relative humidity and temperatures, recorded by a nearby weather station were collected from credible online resources. In addition, qualitative data were collected through in-depth interviews with health workers working in the facilities and with district officers. Statistical analyses, specifically, linear regression and ridge regression, were conducted to examine the trends in the number of malaria cases and the impact of weather on malaria. Qualitative analysis was conducted to examine the common practices of malaria diagnoses and treatments in health facilities in the Mvomero district.

This study found that the burden of malaria in Mvomero district remained significant from 2002 to 2011. No significant increasing or decreasing trends in the number of malaria cases in health facilities were found during the past decade. Regarding the impact of weather on the number of malaria cases, the study found that increases in relative humidity and maximum temperature led to increases in malaria cases. However, precipitation seems to have dual effects. It decreases the number of malaria cases for the current month while it increases the number of cases in later months. From the qualitative analysis, the study showed that due to the lack of equipment and technicians, microscopy was not widely used in Mvomero district, though recommended by the government. Clinical diagnosis was still the major way used to diagnose malaria. Many health workers showed trust in clinical diagnosis. As for treatment, artemether-lumefantrine (ALU), which has been recommended as first-line antimalarial drug in Tanzania since 2007, has replaced sulfadoxine-pyrimethamine (SP) to become the most commonly used antimalarial drug in Mvomero district. Most of the health workers welcomed the use of ALU and considered it a safe and effective drug.