A Preliminary Study of Threonine Deaminase Duplication in Solanaceae 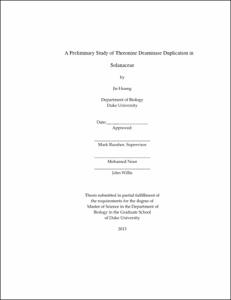 One of the most important questions in evolutionary biology is how new genes and new functions arise and evolve. Among the theories addressing this question, gene duplication is one of the most popular. Previous study has shown that two threonine deaminase (TD) gene copies exist in Solanum lycopersicum, and these two copies have very different functions and low sequence similarities. The primary objective of this study was to widen our understanding of this gene duplication and the subsequent evolutionary processes affecting the duplicate copies by first collecting additional TD sequences from related species, building a gene tree, and inferring the point of gene duplication. The evolutionary processes acting on this gene were then analyzed using the program PAML. Results indicate that 1) The TD duplication probably occurred in before the split of the Solanoideae from the Nicotianoidea; and 2) there is strong evidence for positive selection on one of the TD copies after gene duplication, while for the other TD copy, only weak evidence for positive selection was found; and 3) adaptive improvement of the copy with new function probably spanned a period of at least 25 million years.