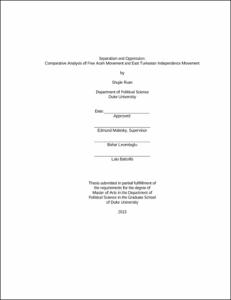 We examine the determinant of peaceful settlement between central governments and secessionist groups in the context of the Third World. There is a heated debate regarding the root cause of ethnic separatism movements. There is also fundamental disagreement among scholars regarding the role played by territorial autonomy in resolving ethnic separatist movements; some believe that the system of autonomy per se is the source of separatist rebellion, while some insist that autonomy agreements are effective in resolving otherwise insoluble conflicts. We investigate the validity of social-economic and political factors proposed by recent studies in explaining the origin of these secession movements. Applying comparative analysis between Indonesia and China, we find that those socio-economic and political factors shaped by the interaction between the central governments and ethno-political groups are not contributory factors. Instead, our results indicate that it is the states' reconciliatory approach per se that matters in determining political outcomes of ethno-political secession in developing or transitional countries.