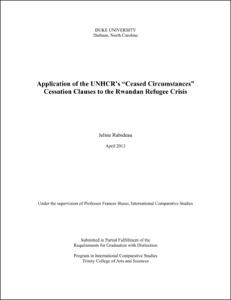 View / Download
1.1 Mb
Date
Author
Rabideau, Jeline
Repository Usage Stats
1,041
views
2,135
downloads
Abstract
Over one hundred thousand Rwandans are currently living abroad as refugees, mostly in the nearby countries of east and central Africa. The Rwandan government, under the authoritarian leadership of President Paul Kagame, is working to convince both its people and the powerful international donor community that Rwanda has recovered, that it has reconciled, and that it is now safe for refugees to return. In October of 2009 the United Nations’ refugee agency, the UNHCR, issued a recommendation that its “ceased circumstances” cessation clauses—Chapter I(C), clauses (5) and (6) of the organization’s Convention—be invoked with respect to these Rwandan refugees. These provisions allow the UN and refugee asylum countries to determine when the reasons for a particular refugee crisis have ended. In July of this year, all remaining Rwandan refugees will lose their group refugee status and the legal protection and benefits this status carries. Many of them will be forced to repatriate. Citing the crimes of Kagame’s military forces both during and after the 1994 Genocide, as well as the repressive political conditions the country continues to experience today, Rwandan refugees are concerned that a forced return will mean exposure to very real and continued fears and dangers. Confronted by both this possibility and by the entirety of their lives and experiences in exile, these refugees must continually renegotiate their notions of “home” and “belonging.”
Type
Honors thesis
Department
International Comparative Studies
Subject
Rwanda, refugees, Kagame, UNHCR, Cessation Clauses, repatriation
Permalink
https://hdl.handle.net/10161/7525
Citation
Rabideau, Jeline (2013). Application of the UNHCR's "Ceased Circumstances" Cessation Clauses to the Rwandan Refugee Crisis. Honors thesis, Duke University. Retrieved from https://hdl.handle.net/10161/7525.
Collections
More Info
Show full item record