Unfolding the Modern Hijab: From the Colonial Veil to Pious Fashion 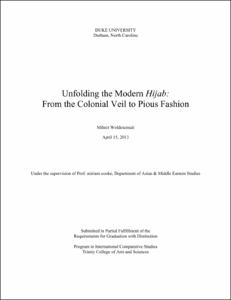 View / Download
3.0 Mb
Date
Author
Woldesemait, Mihret
Repository Usage Stats
1,047
views
3,638
downloads
Abstract
This thesis examines the evolution of the appropriation and meaning of the hijab in the modern Middle East. During colonial times the veil’s depiction as a sign of backwardness, in social artifacts and in colonial discourse, was used to justify colonialism. Following the colonial period, indigenous scholars and other elites called for unveiling, seeing the hijab as an obstacle to “progress.” However, in the 1970s, a new veiling movement emerged that appropriated the veil as a sign of an authentic identity and an instrument to accommodate a changing modern world. This neo-veiling movement, furthermore, standardized a set of Islamic norms and practices that would use the veil as the embodiment of inner piety and ethical states. It is within this context that this thesis discusses contemporary pious fashion in Amman, Jordan. The ethics and aesthetics of veiling in Amman have again shifted the meaning and appropriation of the veil. Establishing an agreement or balance between piety and fashion/ethics and aesthetics in veiling is significant for contemporary urban residents of Amman. Furthermore, this balance has social significance and guides social and cultural interactions. Harmony, however, is not easily achieved; pious fashion is a complicated maze that is carefully navigated by veiled women.
Type
Honors thesis
Department
International Comparative Studies
Subject
hijab, modern Middle East, Jordan, colonialism, piety movements, ethics and aesthetics
Permalink
https://hdl.handle.net/10161/7554
Citation
Woldesemait, Mihret (2013). Unfolding the Modern Hijab: From the Colonial Veil to Pious Fashion. Honors thesis, Duke University. Retrieved from https://hdl.handle.net/10161/7554.
Collections
More Info
Show full item record