Chinese "Sea-Turtles" and Importing a Culture of Innovation: Trends in Chinese Human Capital Migration in the 21st Century 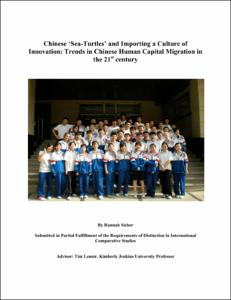 View / Download
4.8 Mb
Date
Author
Sieber, Hannah
Repository Usage Stats
1,123
views
2,490
downloads
Abstract
This thesis explores efforts in China to create an indigenous culture of innovation aimed at freeing China’s economy from dependence on foreign sources of capital and technology while propelling China to the top tier of global industrial powers. Beginning with the historical, cultural and political traditions that led to the establishment of China as an imitator rather than creative inventor in areas of science and technology, the study moves to research recent policy efforts in China to stimulate indigenous innovation through educational reforms and various forms of financial and immigration incentives. The human resource engineering effort to encourage Chinese students (“sea turtles”) to study in the West and then return home to engage in entrepreneurial activity is one element of the Chinese government’s “Long Term Plan” to stimulate innovative capacity, creative research and development, and economic growth. Using current literature on innovation, this study draws on a framework illustrating the ways that the innovation process helps a product move from a creative idea to market-based reality, and analyzes patent filings and research citations to illustrate a shift in ownership of intellectual property in China from foreigners, to “sea turtle” Returnees, to locals. This study concludes with a large body of original survey data on Chinese students in North Carolina’s Research Triangle Park and in Shanghai, examining different motives for leaving and staying in China, as well as reactions to new government incentives to entice people back. What emerges is a surprising twist on the idea of “the brain drain.” More than sixty percent of China’s wealthiest individuals—themselves sea turtles—are in the process of emigrating from China to Canada, the US, and other countries. In an examination of some high-profile entrepreneurs this study points to a lack of confidence in genuine government reform and a deep concern with corruption on many levels as reasons why, despite the best laid plans, successful sea turtles are using their international connections to exit their country of birth.
Description
honors thesis 2013, winner of Distinguished Thesis award in International Comparative Studies
Type
Honors thesis
Department
International Comparative Studies
Subject
China, Long-Term Plan, "sea turtles," innovation, entrepreneurship, emigration
Permalink
https://hdl.handle.net/10161/7560
Citation
Sieber, Hannah (2013). Chinese "Sea-Turtles" and Importing a Culture of Innovation: Trends in Chinese Human Capital Migration in the 21st Century. Honors thesis, Duke University. Retrieved from https://hdl.handle.net/10161/7560.
Collections
More Info
Show full item record