The Origin of Prosociality Toward Strangers 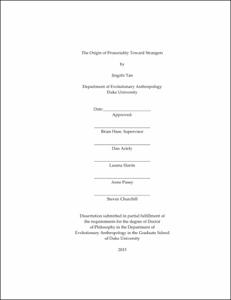 Humans are champions of prosociality. Across different cultures and early in life, humans routinely engage in prosocial behaviors that benefit others. Perhaps most strikingly, humans are even prosocial toward strangers (i.e. xenophilic). This is an evolutionary puzzle because it cannot be explained by kinship theory, reciprocal altruism or reputation. The parochialism hypothesis proposes that this extreme prosociality is unique to humans, is motivated by unselfish motivation and evolved through group selection made possible by human culture and warfare. The first impression hypothesis, on the other hand, proposes that xenophilia can evolve to promote the selfish benefits that accrue from extending one's social network. It predicts that 1) nonhuman species can evolve prosociality toward strangers when the benefit of forming new relations is higher than the cost, 2) the motivation for prosociality can be selfish, and 3) encounters with strangers can be a positive social event since strangers represent potential social partners. This dissertation presents three sets of experiments designed to test these predictions with bonobos (Pan paniscus), a species known for reduced xenophobia. These experiments showed, first, that bonobos voluntarily shared monopolizable food with a stranger and helped the stranger to obtain out-of-reach food. Second, the observed prosociality was driven by a selfish motivation to initiate an interaction with the stranger in close proximity and an other-regarding motivation to benefit the stranger. Third, an involuntary yawning task and a voluntary choice task show converging results that bonobos attribute positive valence to completely unknown strangers by default. These experiments support the three core predictions of the first impression hypothesis and challenge the view that intergroup competition is crucial to the origin of prosociality toward strangers in our species. Instead, the first impression hypothesis proposes that xenophilia in bonobos is probably an adaptation to initiating non-kin cooperation. Because female bonobos are highly cooperative even though they are the dispersing sex, xenophilia might function to quickly establish cooperative relationships with new immigrants. This suggests that xenophilia and reciprocity are likely two complementary aspects of non-kin cooperation: the former explains its initiation while the latter explains its maintenance. Similarly, xenophilia in humans is likely a result of the increasing need for cooperation among non-kin due to enhanced fission-fusion dynamics, population expansion, obligate cooperative foraging and greater dependence on cultural knowledge.