Interacting Photons in Waveguide-QED and Applications in Quantum Information Processing 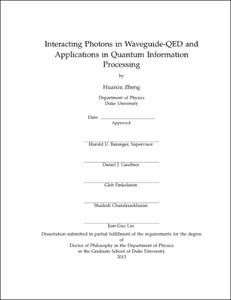 experiments. This enables the generation of strong nonlinear photon-photon interactions

at the single-photon level, which is of great interest for the observation

of quantum nonlinear optical phenomena, the control of light quanta in quantum

information protocols such as quantum networking, as well as the study of

QED experimental systems, which in turn makes them promising candidates for

quantum information processing. Compared to cavity-QED systems, there are

two new features in waveguide-QED: the existence of a continuum of states and

the restricted 1D phase space, which together bring in new physical effects, such

as the bound-state effects. This thesis consists of two parts: 1) understanding the

fundamental interaction between local quantum objects, such as two-level systems

and four-level systems, and photons confined in the waveguide; 2) exploring

its implications in quantum information processing, in particular photonic

First, we demonstrate that by coupling a two-level system (TLS) or three/fourlevel

system to a 1D continuum, strongly-correlated photons can be generated

inside the waveguide. Photon-photon bound states, which decay exponentially as a function of the relative coordinates of photons, appear in multiphoton scattering

processes. As a result, photon bunching and antibunching can be observed

in the photon-photon correlation function, and nonclassical light source can be

generated on demand. In the case of an N-type four-level system, we show

that the effective photon-photon interaction mediated by the four-level system,

gives rise to a variety of nonlinear optical phenomena, including photon blockade,

photon-induced tunneling, and creation of single-photon states and photon

pairs with a high degree of spectral entanglement, all in the absence of a cavity.

QED, it is important to study systems having more than just one TLS/qubit.

a system of two qubits coupled to a 1D waveguide. Quantum beats emerge in

photon-photon correlations, and persist to much longer time scales because of

non-Markovian processes. In addition, this system can be used to generate a

by an on-resonance laser, further paving the way toward waveguide-QED-based

Furthermore, based on our study of light-matter interactions in waveguide-

QED, we investigate its implications in quantum information processing. First,

obtained by scattering a coherent state off a two-level system. The rate for key

generation is found to be twice as large as for other sources. Second, we propose

interactions are mediated by the coupling to a three- or four-level system,

based on which photon-photon -phase gates (Controlled-NOT) can be implemented for universal quantum computation. We show that high gate fidelity is

and photonic-crystal waveguides. The proposed system can be an important