Functional Interactions and Evolution of cAMP-PKA Signaling in Saccharomyces 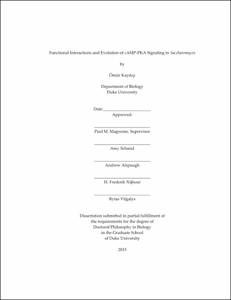 Intracellular cAMP concentrations show decaying oscillations upon glucose replenishment in derepressed yeast cells. The quantitative characteristics of oscillations are distinct within and between Saccharomyces species. Given the tight regulation of cAMP levels and its critical role, the variation in cAMP oscillatory dynamics could be reflective of differential interactions of cAMP-PKA signaling that also underlie induction of developmental programs to changing environments. As such, intracellular cAMP levels and dynamics could potentially be used as molecular phenotypes.