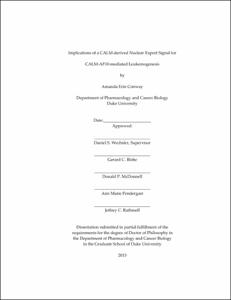 The t(10;11) chromosomal translocation gives rise to the <italic>CALM-AF10</italic> fusion gene and is found in patients with aggressive and difficult-to-treat hematopoietic malignancies. <italic>CALM-AF10</italic>-driven leukemias are characterized by a perturbed epigenetic and transcriptional state. Specifically, the <italic>HOXA</italic> cluster genes are hypermethylated on Histone H3 lysine 79 (H3K79), which corresponds with their transcriptional upregulation. Conversely, <italic>CALM-AF10</italic> cells display global H3K79 hypomethylation. DOT1L, the H3K79 histone methyltransferase, interacts with the OM-LZ domain of AF10, and the AF10 OM-LZ domain has been shown to be necessary and sufficient for CALM-AF10-mediated transformation. These data have suggested a critical role for the AF10-DOT1L interaction in <italic>CALM-AF10</italic> leukemias. However, the mechanism(s) by which DOT1L-mediated epigenetics are perturbed and the precise role of CALM in leukemogenesis have remained unclear.

In this dissertation, we examine the contribution of CALM to CALM-AF10-mediated leukemogenesis. We determine that CALM contains a functional nuclear export signal (NES) that mediates steady-state cytoplasmic localization of CALM-AF10. An NES is a highly conserved leucine-rich amino acid sequence that is recognized by the nuclear export receptor, CRM1. Classically, CRM1 binds to NES-containing proteins and mediates their export from the nucleus to the cytoplasm through the nuclear pore complex. Through structure-function analyses, we determine that the CALM-derived NES is necessary and sufficient for CALM-AF10-dependent leukemogenesis. In addition, fusions of NES motifs from heterologous proteins (ABL1, Rev, PKIA, and APC) in-frame with AF10 are sufficient to immortalize murine hematopoietic progenitors <italic>in vitro</italic>. From these data, we conclude that a CRM1-dependent NES represents the functional contribution of CALM for CALM-AF10-mediated leukemogenesis.

In the second part of this dissertation, we examine the mechanism(s) by which the CALM NES imparts transformation potential to AF10. We determine that the CALM NES is essential for CALM-AF10-dependent <italic>Hoxa</italic> gene upregulation and aberrant H3K79 methylation. Using co-immunofluorescence microscopy, we observe increased cytoplasmic localization of DOT1L in the presence of CALM-AF10, suggesting that mislocalization of DOT1L may lead to a global loss of H3K79 methylation. In addition to mediating nuclear export, we find that the CALM-CRM1 interaction is critical for targeting CALM-AF10 to the <italic>Hoxa</italic> locus. Inhibition of CRM1 with Leptomycin B prevents transcription of <italic>Hoxa</italic> genes in <italic>CALM-AF10</italic> leukemia cells. These findings uncover a novel mechanism of leukemogenesis mediated by the nuclear export pathway and support further investigation of the utility of CRM1 inhibitors as therapeutic agents for patients with <italic>CALM-AF10</italic> leukemias.