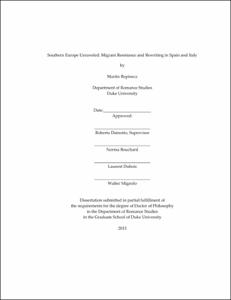 This thesis explores the phenomenon of canonical revision by migrant and postcolonial writers in Spain and Italy. By recycling, rewriting or revising canonical works or film movements of the host countries in which they work, these writers call attention to Spain's and Italy's concerted attempts to perform a European identity. In doing so, they simultaneously challenge the literary categories into which they have been inserted, such as "migrant" or "Hispano-African" literatures. Rather, these writers illustrate that these categories, too, work in tandem with other forms of exclusion to buttress, rather than challenge, Spain and Italy's nationalist attempts to overcome their-"South-ness" and perform European-ness.

The thesis consists of four chapters, each focusing on a different migrant writer. The first chapter examines how Amara Lakhous, an Algerian-Italian writer, models his novels after the film genre of the commedia all'italiana in order to make national and ethnic identity categories look like theater and spectacle. The second chapter analyzes how Najat el-Hachmi, a Catalan writer of Moroccan birth, rewrites a classic of Catalan literature (Mercé Rodoreda's The Time of the Doves) to challenge the oppositions between "immigrant" and "native," while also articulating a transnational, feminist critique of patriarchy. The third chapter studies how Francisco Zamora Loboch, an Equatorial Guinean exile in Spain, re-interprets Don Quijote as an iconically anti-racist text. The fourth chapter studies how Jadelin Mabiala Gangbo, a Congolese-Italian writer, recycles Shakespeare's play Romeo and Juliet in his novel Rometta e Giulieo in order to challenge the polarized dichotomy of "migrant" and "canonical" writing.

My work both draws on and critiques several, interrelated fields of scholarship, including Southern European studies, Afro-European studies, Mediterranean studies, migrant literary studies, and postcolonial studies, as well as criticism pertaining to specific canonical works these writers revisit in their works. In doing so, I hope to demonstrate that a critique of racism or xenophobia in contemporary Spain or Italy necessitates not only a critique of the Global South against Eurocentrism, but also a simultaneous critique of Europe's North-South divide.