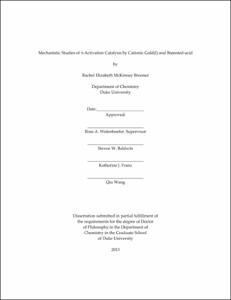 Soluble gold(I) complexes are highly efficient catalysts for the functionalization of C-C multiple bonds through the addition of carbon- or heteroatom-nucleophiles across &pi;-bonds or cycloisomerizations of enynes and related &pi;-systems. Mechanisms involving outer-sphere attack of a nucleophile on the electrophilic &pi;-ligand of a cationic gold &pi;-complex are typically invoked for gold(I)-catalyzed hydrofunctionalization and cycloisomerization processes, but direct experimental evidence for this mechanism is limited.

In addition, a pair of axially chiral dicationic, bis(gold) &pi;-alkene complexes that contain a 2,2&#8242;-bis(phosphino)biphenyl ligand are reported. The complexes show no intramolecular Au-Au interactions or facial selectivity for complexation, but solution analyses suggest that the environment about one gold center affects the behavior of the proximal gold center through a yet unknown mechanism. Gold(I) &pi;-alkene, alkyne, diene, and allene complexes that bear a triphenylphosphine supporting ligand have also been synthesized and characterized in situ. The &pi;-ligands in the triphenylphosphine gold complexes were considerably more labile than those bearing bulky, electron rich phosphine or N-heterocyclic carbene ligands, and the complexes decomposed in solution above -20 °C.

Mechanistic investigation of the gold-catalyzed cycloisomerization of a 7-aryl-1,6-enyne led to characterization of the first organometallic complex directly observed in the course of an enyne cycloisomerization. The complex is best described as a gold &pi;-(bicyclo[3.2.0]heptane) complex with a domination metallacyclopropane binding interaction and undergoes an acid-catalyzed rearrangement to yield a stable bicyclo[3.2.0]heptane product which can further isomerize in the presence of Ag+. In a further effort to understand the reactive species in catalytic cycloisomerizations, the first example of a gold cyclopropyl carbene was synthesized and fully characterized.

Finally, in an effort understand the mechanistic distinctions between electrophilic metal-catalyzed hydrofunctionalization and similar Brønsted acid-catalyzed additions, the kinetics and stereochemistry of intramolucar acid-catalyzed hydrofunctionalizion were studied. In all cases, the transformations were > 95 % selective for <italic>anti</italic>-addition and displayed rate laws similar to those expected for metal-catalyzed variants. A concerted C-H, C-X bond forming mechanism for addition is proposed.