The Male Coming-of-Age Theme in the Hebrew Bible 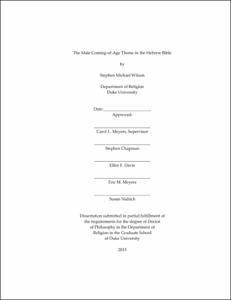 This study identifies and elaborates on a theme in the Hebrew Bible (HB) that has largely gone unnoticed by scholars: the transition of a male adolescent from boyhood to manhood. Beyond identifying the coming-of-age theme in different HB texts, the project also describes how the theme is employed by biblical narrators and redactors to highlight broader messages and transitions in the historical narratives of the HB. It also considers how these stories provide insight into the varying representations of biblical masculinity.

The project begins by showing how the recent discussions on masculinity in the HB and biblical rites of passage are incomplete without an analysis of how a boy becomes a man in the biblical text. It then establishes important principles for recognizing the maturation theme in a given narrative. More foundational work is done in chapter 2, which describes the characteristic features of manhood and boyhood as depicted in the HB to facilitate the identification of narratives where a transition is made from boyhood to manhood.

The next two chapters identify five case studies of coming-of-age: David in 1 Sam 17; Solomon in 1 Kgs 1-2; an alternative tale of Solomon's maturation in 1 Kgs 3; Moses in Exod 2; and Samuel in 1 Sam 3. Chapter 5 discusses the converse of the coming-of-age theme by presenting stories of boys who fail to mature: Jether in Judg 8, and Samson in Judg 13-16. In each case study, the narrator's techniques for highlighting the maturation theme are identified. The ways that the narrator employs the theme to point to other significant plot points or narrative transitions are also identified. Most notably, the failure-to-mature theme in the Samson narratives typifies Israel's political immaturity in Judges, and the two alternative tales of Solomon's maturation highlight an important transition in the Deuteronomistic History from the uncertain and often bloody years of the monarchy's establishment to the peaceful, prosperous reign of Solomon.

The seven case studies are also examined for the image of masculinity that they present, and that presentation is compared to the general view of manhood in the HB. Five of the seven offer quite similar images of masculinity; and these also cohere to the general picture of biblical manhood. However, two narratives (Samuel's maturation in 1 Sam 3 and Solomon's in 1 Kgs 3) depart from this conception of masculinity, each in the same way: both depict a masculinity free of violence and the need for the constant, forceful defense of manhood and honor. Since these two texts have often been ascribed to the same author, the Deuteronomistic Historian, the study suggests that he may be offering a new view of masculinity more suited to his historical context.

The project ultimately proves that the theme of male coming-of-age, heretofore virtually unrecognized, is found in several biblical texts. Moreover, this theme is often used to indicate other important messages and transitions in Israel's historical narrative and can provide unique insight into biblical constructions of masculinity.