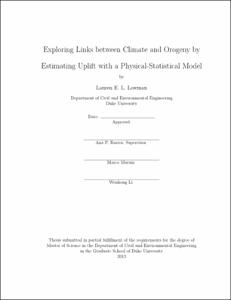 The Andes Mountains provide a unique setting to study the interplay between climate and geomorphology. The mechanism proposed to describe the evolution of Andean topography is a feedback loop where precipitation erodes the surface, causing the earth's crust to thin and, through buoyancy, uplift the surface. The uplifted surface acts as a barrier which in turn increases precipitation and reinforces the feedback. Demonstrating this feedback is difficult due to the long temporal scales involved. To overcome this challenge, we consider current topographic constraints and climate regimes as a means to evaluate geomorphologic behavior. Initial data analysis leads to the identification of qualitative similarities in the distributions of outlets and precipitation events by elevation, which suggest a link between climatic and fluvial erosion and a strong interaction between orography and precipitation. To explore impacts of this link on regional geomorphology, we estimate uplift rates under a Bayesian hierarchical modeling framework based on the stream power erosion law (SPEL). We specify model parameters using slope and area data generated from a high-resolution, digital elevation map and mean annual precipitation (MAP) derived from 14 years of TRMM 3B42 v.7 precipitation rainfall rates, supplemented with rain gauge data from the Kospinata network in Peru. A key component of the analysis is the development of a natural spatial scale which captures the qualitative similarities observed in the region and provides a means to compare estimated uplift rates to the geomorphologic behavior of each basin. The estimated uplift values recovered from the analysis range from 0.81 to 11.59 mm/yr and thus fall within a physically-reasonable range for the central Andes region. These estimates also are in strong agreement with basin hypsometry. The analysis further reveals a pattern of spatially dependent uplift, which is consistent with the differential tectonic forcing imposed on the basins by the subducting Nazca plate. The adaptation of the physical-statistical model represents a novel method for quantifying the relationship between climate and orography and estimating key parameters of SPEL.