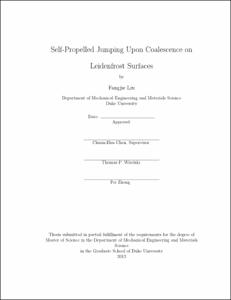 When two drops coalesce on a superhydrophobic surface, the merged drop spontaneously jumps out of plane. This self-propelled jumping has been observed on many biological and synthetic superhydrophobic surfaces, with potential applications in self-cleaning and self-sustained condensers. The jumping is powered by surface energy released upon coalescence and the velocity was found to follow capillary-inertial scaling. However, two puzzles remain to be solved: (i) The jumping velocity is significantly smaller than the capillary-inertial velocity, which corresponds to a very low energy conversion efficiency; (ii) The capillary-inertial scaling is no longer valid below a critical radius, and jumping is no longer observed upon coalescence of drops well below the cut-off radius.

To investigate these puzzles, a Leidenfrost collider was constructed on which drops floating on a vapor layer were guided to merge and subsequently jump on a substrate heated well above the liquid boiling point. The jumping velocity upon symmetric coalescence of equally-sized drops was observed to follow the capillary-inertial scaling, and the non-dimensional jumping velocity of approximately 0.2 on Leidenfrost surfaces was consistent with that on superhydrophobic surfaces. Asymmetric coalescence on Leidenfrost surfaces led to a smaller dimensionless jumping velocity, but the overall trend was still consistent with the capillary-inertial scaling. Unlike superhydrophobic surfaces, we did not observe an obvious cut-off for drop radii down to 20 &mu m, the lowest accessible to the Leidenfrost collider. When compared with a phase-field numerical simulation, the Leidenfrost experiments confirmed the capillary-inertial mechanism leading to the self-propelled jumping.