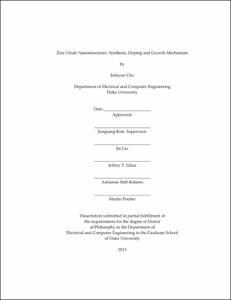 Over the past decade, the study of zinc oxide (ZnO) II-VI semiconducting nanostructures has been a burgeoning research area because of this material's unique electrical and optical properties. Despite the promise of its characteristics for numerous applications, usage of ZnO in the fabrication of nanoscale devices on a commercial scale remains a challenge because of our lack of knowledge of the underlying physics and chemistry of nanostructures. Sustainable progress in nanowire manufacturing techniques requires that we first undertake basic studies to address these poorly understood underlying concepts before we embark on applied engineering. If these fundamental studies prove successful, then characterization, fabrication, and large-scale integration of nanostructures that use ZnO could be applied to a range of engineering fields. This doctoral dissertation is primarily concerned with the synthesis and doping required for the creation of novel ZnO nanostructures and the growth mechanisms of such structures. Numerous studies have been made of various kinds of ZnO nanostructures. However, no studies have been reported of systematic theoretical modeling that uses both density functional theory and as-synthesized nanostructures to explain the growth mechanisms involved in these devices. First, sulfur-doped ZnO nanostars, synthesized through a hydrothermal method, will be discussed. This section uses ab initio simulations in discussing the synthesis of novel ZnO nanostructures and their proposed growth mechanisms. Moreover, this discussion also addresses the optical properties of ZnO structures that cause sulfur doping to enhance their emission of green light. The next section introduces a novel synthetic methodology to reliably produce well-aligned vertical ZnO nanowire arrays on amorphous substrates. Vertical alignment of nanowires significantly improves the performance of devices like LEDs and solar cells. Because these vertically aligned arrays have historically been made using sapphire substrates that hinder their commercialization, substantial effort has been invested in using ZnO nanocrystal seeds to grow vertically aligned ZnO nanowires on silicon substrates. Well-known synthetic methods, such as zinc acetate dissolved in methanol or zinc acetate combined with sodium hydroxide (or potassium hydroxide), have typically been used in pursuit of this goal without a detailed understanding of the mechanisms of seed creation. The consequence of this lack of knowledge has been inconsistent reproducibility in growing vertically aligned nanowires on silicon substrates. This discussion includes the details of mechanisms that explain the why and how of creation of vertical/misoriented ZnO nanocrystal seeds on silicon substrates. In addition, a preferential c-axis-oriented ZnO nanocrystal seed has been successfully synthesized using a solution composed of ammonium hydroxide (NH4OH) and zinc acetate (Zn(O2CCH3)2). Lastly, the synthesis of sea urchin-like microstructures known as ZnO sea urchins will be introduced. Among the various kinds ZnO structures, the ZnO sea urchin is a integrated structure composed of a 3-D microsphere and 1-D nanowires. Dye-sensitized solar cells (DSSCs) made of ZnO sea urchins have shown a higher power conversion efficiency than planar nanowires. This is because ZnO sea urchins have a higher surface area per unit of volume than planar nanowire arrays. This larger surface area allows larger amounts of dye to access the semiconducting nanowires. We have synthesized the sea urchin structures composed of ZnOxPy microspheres, a mixed of zinc phosphide (Zn3P2) and ZnO phase, encapsulated in an array of ZnO nanowires. Synthesis of these interesting structures was achieved without resorting to the prefabricated 3-D microsphere templates that other groups used in previous studies. This new approach to the synthesis of ZnO sea urchin structures was accomplished by simply adding Zn3P2 powder to the C (graphite) and ZnO source powders in a chemical vapor transport method. The ZnO sea urchin's material properties and growth mechanism will be characterized and discussed in detail.