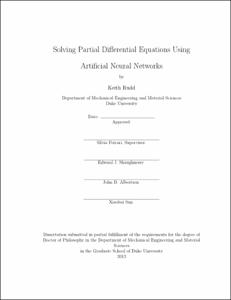 CPROP reduces the dimensionality of the optimization problem by using direct elimination, while satisfying the equality constraints associated with the boundary and initial conditions exactly, at every iteration of the algorithm. The effectiveness of this method is demonstrated through several examples, including nonlinear elliptic

and parabolic PDEs with changing parameters and non-homogeneous terms. The computational complexity analysis shows that CPROP compares favorably to existing methods of solution, and that it leads to considerable computational savings when subject to non-stationary environments.

The CPROP based approach is extended to a constrained integration (CINT) method for solving initial boundary value partial differential equations (PDEs). The CINT method combines classical Galerkin methods with CPROP in order to constrain the ANN to approximately satisfy the boundary condition at each stage of integration. The advantage of the CINT method is that it is readily applicable to PDEs in irregular domains and requires no special modification for domains with complex geometries. Furthermore, the CINT method provides a semi-analytical solution that is infinitely differentiable. The CINT method is demonstrated on two hyperbolic and one parabolic initial boundary value problems (IBVPs). These IBVPs are widely used and have known analytical solutions. When compared with Matlab's nite element (FE) method, the CINT method is shown to achieve significant improvements both in terms of computational time and accuracy. The CINT method is applied to a distributed optimal control (DOC) problem of computing optimal state and control trajectories for a multiscale dynamical system comprised of many interacting dynamical systems, or agents. A generalized reduced gradient (GRG) approach is presented in which the agent dynamics are described by a small system of stochastic dierential equations (SDEs). A set of optimality conditions is derived using calculus of variations, and used to compute the optimal macroscopic state and microscopic control laws. An indirect GRG approach is used to solve the optimality conditions numerically for large systems of agents. By assuming a parametric control law obtained from the superposition of linear basis functions, the agent control laws can be determined via set-point regulation, such

that the macroscopic behavior of the agents is optimized over time, based on multiple, interactive navigation objectives.

Lastly, the CINT method is used to identify optimal root profiles in water limited ecosystems. Knowledge of root depths and distributions is vital in order to accurately model and predict hydrological ecosystem dynamics. Therefore, there is interest in accurately predicting distributions for various vegetation types, soils, and climates. Numerical experiments were were performed that identify root profiles that maximize transpiration over a 10 year period across a transect of the Kalahari. Storm types were varied to show the dependence of the optimal profile on storm frequency and intensity. It is shown that more deeply distributed roots are optimal for regions where

storms are more intense and less frequent, and shallower roots are advantageous in regions where storms are less intense and more frequent.