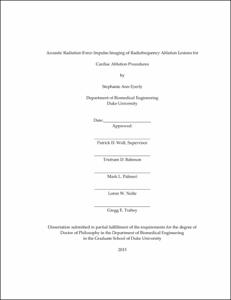 This dissertation investigates the use of intraprocedure acoustic radiation force impulse (ARFI) imaging for visualization of radiofrequency ablation (RFA) lesions during cardiac transcatheter ablation (TCA) procedures. Tens of thousands of TCA procedures are performed annually to treat atrial fibrillation (AF) and other cardiac arrhythmias. Despite the use of sophisticated electroanatomical mapping (EAM) techniques to validate the modification of the electrical substrate, post-procedure arrhythmia recurrence is common due to incomplete lesion delivery and electrical conduction through lesion line discontinuities. The clinical demand for an imaging modality that can visually confirm the presence and completeness of RFA lesion lines motivated this research.

This thesis describes results for ARFI imaging of RFA lesions for three research milestones: 1) an in vivo experimental verification model, 2) a clinically translative animal study, and 3) a preliminary clinical feasibility trial in human patients. In all studies, 2-D ARFI images were acquired in normal sinus rhythm and during diastole to maximize the stiffness contrast between the ablated and unablated myocardium and to minimize the bulk cardiac motion during the acquisition time.

The first in vivo experiment confirmed there was a significant decrease in the measured ARFI-induced displacement at ablation sites during and after focal RFA; the displacements in the lesion border zone and the detected lesion area stabilized over the first several minutes post-ablation. The implications of these results for ARFI imaging methods and the clinical relevance of the findings are discussed.

The second and third research chapters of this thesis describe the system integration and implementation of a multi-modality intracardiac ARFI imaging-EAM system for intraprocedure lesion evaluation. EAM was used to guide the 2-D ARFI imaging plane to targeted ablation sites in the canine right atrium (RA); the presence of EAM lesions markers and conduction disturbances in the local activation time (LAT) maps were used to find the sensitivity and specificity of predicting the presence of RFA lesion with ARFI imaging. The contrast and contrast-to-noise ratio between RFA lesion and unablated myocardium were calculated for ARFI and conventional ICE images. The opportunities and potential developments for clinical translation are discussed.

The last research chapter in this thesis describes a feasibility study of intracardiac ARFI imaging of RFA lesions in clinical patients. ARFI images of clinically relevant ablation sites were acquired, and this pilot study determined ARFI-induced displacements in human myocardium decreased at targeted ablation sites after RF-delivery. The challenges and successes of this pilot study are discussed.

This work provides evidence that intraprocedure ARFI imaging is a promising technology for the visualization of RFA lesions during cardiac TCA procedures. The clinical significance of this research is discussed, as well as challenges and considerations for future iterations of this technology aiming for clinical translation.